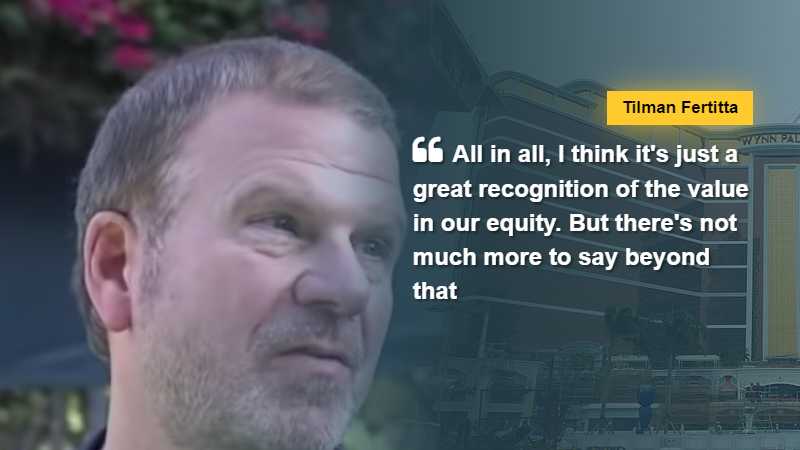 Tilman Fertitta says “All in all, I think it’s just a great recognition of the value in our equity. But there’s not much more to say beyond that,” via Daily Free Games Casino – CC

The announcement that Tilman Fertitta’s Fertitta Entertainment now owns 6.1% of Wynn Resorts’ shares is one of the latest exciting headlines in the gaming industry. Wynn Entertainment CEO Craig Billings praised the move.

A Schedule 13G filing with the Securities and Exchange Commission (SEC) disclosed that Fertitta Entertainment, Fertitta himself, and another entity purchased 6.91 million Wynn shares in October. As it turned out, some of Fertitta’s purchases happened while the casino operator bought its own stock. This brings Encore’s year-to-date repurchase tally to $166.4 million from the purchase of 29 million shares in the third quarter.

“Well, I guess what I can say is kudos to him (Fertitta) because he’s done quite well,” said Billings during a conference call for the company’s third-quarter earnings.

“Since he appears to have started acquiring in the second quarter when the stock was excessively cheap. It’s actually right around when we were buying back some stock as well that we reported in our second quarter Q (10Q).”

The Wynn CEO also said that the company kept an eye on transactions that showed stock accumulation during the second quarter. With today’s 8.31% gain, Wynn stock is up 22.64% in the last month. This means that Fertitta is almost certainly making money on his investment.

Fertitta’s plans for his Wynn investment were not clear right away, but he is now the second-largest individual investor, behind only Elaine Wynn.

It won’t be easy for the billionaire to buy Wynn if he decides to do so. He would probably have to borrow money from the capital markets and Fertitta Entertainment would probably have to take on debt with a low rating. In this situation, some banks might not want to give out a lot of non-investment grade corporate bonds, especially in the cyclical gaming industry.

Analysts said that the piece of land on the Strip where Fertitta is building a new casino could be used as a bargaining chip. This could be used in a deal to buy Wynn. But it’s still not clear if he’ll go that route.