The Los Angels Rams will take on the Cincinnati Bengals for Super Bowl LVI, Sunday the 13th. Bust out the guacamole, the beers, & the betting apps to make the most of your Super Bowl Sunday. The Rams will play at home, but will be the away team, as they take on skilled-yet-lucky Cincinnati Bengals. The Rams have a -4.5 spread and -200 money line in their favor because Vegas thinks they are going to win as well.

The Rams are lead by young prodigy Head Coach Sean McVay and Offensive Coordinator Kevin O’Connell (who after this game will become the Vikings’ Head Coach). On the field Matt Stafford’s first year as quarterback of the Rams was electric, especially with the top wide receiver, Cooper Kupp. Furthermore, their defense impressed all season, and will be the main reason the Bengals lose in Super Bowl LVI.

Use Maximbet for Best Winnings 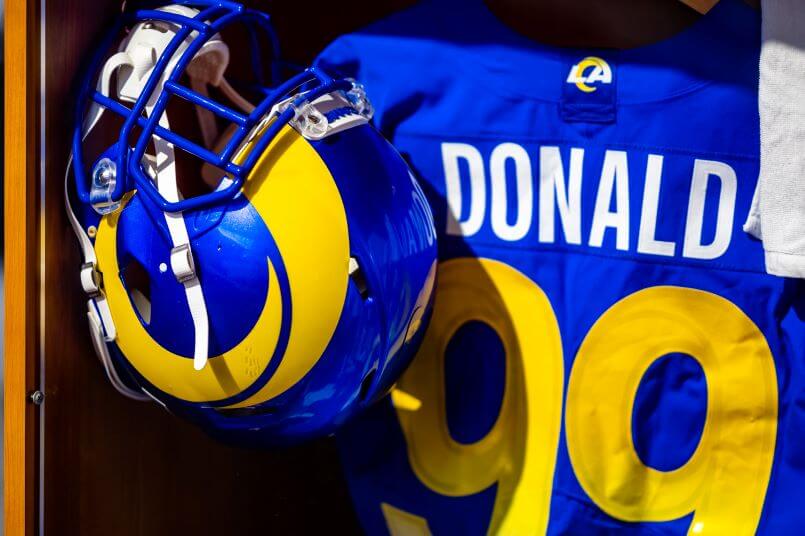 Image by Erik Drost, 2021. Flickr, Some Rights Reserved, https://www.flickr.com/photos/edrost88/51155685873/
Super Bowl LVI in Los Angeles will have the Los Angeles Rams face off against the Cincinnati Bengals.

This has been the year for Cooper Kupp. He lead fantasy wide receivers in points with his 145 catches for 1,947 yards and 16 touchdowns during regular season. During the post-season, he has caught 30 passes for 386 yards and four touchdowns. Kupp is playing at a high level, and Cincinnati is 20th in the league during the season defending wide receivers, and 26th in the last third of the season.

The Rams offense has been so good that their offensive coordinator Kevin O’Connell is going to be the Minnesota Vikings Head Coach next year. Stafford has shown with a good supporting cast he can dominate. Stafford had his best best season since his 2011 breakout where he also ranked fifth in fantasy quarterbacks, threw over 400 passes for over 4,850 yards and both seasons he had exactly 41 touchdowns. Place all your bets on the spread, money line, prop bets and more utilizing MaximBet, who have a great welcome bonus.

Los Angeles had an impressive year both offensively and defensively. Stars like Aaron Donald, Sebastian Joseph-Day, Jalen Ramsey, & Von Miller held quarterbacks to the fifth fewest fantasy points scored to quarterbacks. They also held running backs to twelfth fewest and wide receivers to eleventh fewest. The Rams only allow 20.8 points at home to opponents, which gives them the lead when looking at the Bengals 22.9 points they give up on the road. Despite the Rams technically being the away team, they are playing at their home stadium.

During the playoffs, Los Angeles has held their opponents to an average of 54 yards on the ground and 221 yards in the air. That is impressive compared to the Bengals’ average of 127 rushing yards and 244 passing yards. Cincinnati only ranks 16th best at defending quarterbacks, 20th best at defending both running backs and wide receivers, and 28th against tight ends. The Rams have the better defense at stopping the run, taking away top options in the air, and at creating turnovers. Los Angeles ranks third in both sacks and interceptions this year. So with their high-powered offense that ranks second in passing touchdowns, and their brutal defense who are the second best at defending passing touchdowns, Go Rams!

The Rams have been going all in trading away their last five first round picks. They continued to go all in this year by going after big names like Matt Stafford, Odell Beckham Jr., and Von Miller (just to name a few). The Rams haven’t had a first round draft pick since 2016 and won’t until 2024, as they owe their 2022 and 2023 first round picks to the Detroit Lions for Stafford. This could be the new trend setting GM approach when the Rams win the Super Bowl. Sure, it is nice to draft Ja’Marr Chase, but trading for players at the deadline takes straight from baseball. It is all worth it if they get the ring though.

The Super Bowl is more than just the game, the commercials, the guacamole, the beer, and the half-time show all lead to the lure of the Big Game. Get all the best Prop Bets from a possible Martha Stewart appearances to how long the National Anthem will be.