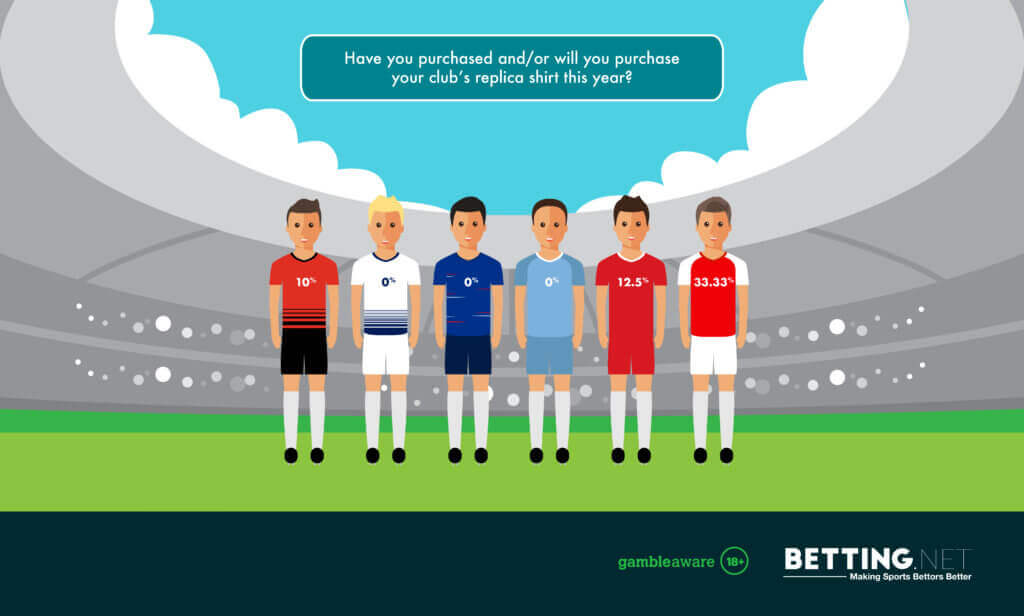 In Great Britain and across the world, football fans can be seen donning the shirt of the club they support. Watching a live game, you would estimate that the majority of the home fans were wearing their team’s colours, usually in the form of an official replica shirt.

Despite this, a survey spanning fans of English football has found that a mere 9.72% of football fans will actually purchase their team’s shirt this year. As stated, football shirts are popular items and are a major source of revenue from club stores, so why is it that they’ve seemingly gone out of style?

Too pricey for the average football fan

The group of varied football fans revealed that 90.28% of them don’t buy their team’s new shirt every year, with 76.39% saying that they haven’t or won’t buy the new shirt of this season either.

This is the perfect time to ask as it was found that 85.71% of those who do buy their club’s football shirt, do so on release or at full price. This implies that most UK football fans who are going to buy a shirt, have done so already.

Despite the vast majority of shirt-buyers opting to do so at full price, 55.38% of the sample group say that price is the major factor behind not purchasing their team’s new strip each season.

Why else would fans not buy the new shirt?

The other 44.62% have different reasons for not buying the shirt.

One reason could be how similar home kits are each year, with the team’s primary colour needing to stay very similar, lest they risk a fan uprising. In the same vein, many football fans – particularly those who go to games – own their club’s shirt from some point in their history. The more superstitious fans – of which there are many – may deem their current shirt lucky in some way, giving little need to buy a new one.

The shirt is a symbol of the club, one which inspires many fans. So, when a club does change in a drastic way, fans often oppose the decision. For example, under new owners in June 2012, Cardiff City changed their badge from the iconic bluebird to a red dragon, while also swapping their home colours from blue to red. Billionaire chairman Vincent Tan claimed it would boost the club’s international appeal, despite Cardiff being associated with their blue home jersey since 1908.

A combination of unfavourable results and growing fan unrest led to the club reverting to their original colours just two-and-a-half years later. This, in turn, led to record-breaking home shirt sales in the summer of 2016, as well as another record-breaking day of shirt sales this summer. Fans may not always by the new shirt, but they recognise its significance each year, so it is an important item.

When it comes to buying for themselves, the majority of fans like to keep it under £30, with 40.85% falling into price brackets of up to £30 – a third of which will spend a maximum of £20. As for a single price bracket, the largest bracket was for £31 to £40, with 33.80% saying that this is how much they’d spend on their team’s shirt. Only 4.23% of the sample would pay over £50 for their football shirt – which becomes quite a startling statistic in the section below.

Despite a large percentage of top-six fans claiming that price isn’t the issue, a tiny per cent is actually willing to cough up what their clubs are asking for this season. Of the fans of the top six teams, only 11.11% of Manchester United fans and 14.29% of Liverpool fans would be willing to pay £50 or more for their team’s shirt.

Within the top six, the lowest price for a plain home shirt is Liverpool’s and Arsenal’s kits at £55, with Spurs and Chelsea charging £65 at the top end. As the majority of football shirt buying for oneself comes at full price, this shows that the vast majority of top-six fans in the sample simply aren’t going to buy their team’s shirt due to the price.

Other Premier League fans outside of the top six have a majority of 33% willing to pay up to £40 for a shirt, but even Bournemouth and the newly promoted Wolverhampton Wanderers price their shirts at £45 and up.

There are many explanations for football fans not wanting to buy their club’s new shirt every year, or even just this year, but in this survey, the cost appears to be the major issue.