The big surprise from last week was Alabama falling to Texas A&M, which means that teams like Cincinnati, Iowa, and Oklahoma have a legit shot to control their own destiny if they win out and get into the playoffs. 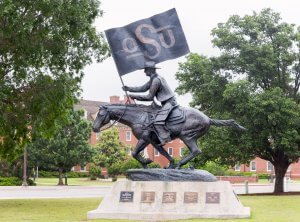 Texas looks to bounce back after last week’s heartbreaking loss to Oklahoma with another shot at an undefeated Oklahoma school. Oklahoma State is 5-0 and is hoping to keep pace with the Sooners in the conference. The Cowboys are the underdogs in this road matchup but I think their defense will be able to keep the Longhorn offense in check. If Oklahoma State can get past Texas they have a great shot at running until their matchup with Oklahoma on November 27th.

The Spartans head to Bloomington to take on Indiana in what could be a trap game for Michigan State leading up to their showdown with Michigan in a couple of weeks. Indiana is off to a disappointing start after heading into the season with high expectations and I think they will be able to keep this game close. Michigan State has too many athletes on the offensive side of the ball and I like the Spartans to cover the spread and win something like a 27-17 game. 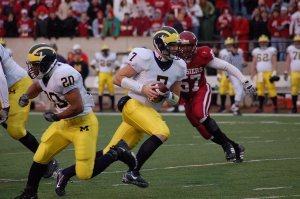 The Big 10 is as good as it has ever been this season from top to bottom as teams have really elevated their play throughout the league.

The East side of the Big 10 is loaded and we will get to see which team ends up prevailing as most of these teams square off in the next few weeks. Ohio State is playing well as of last and they are still the favorite to come out of the Big 10

The Big 12 gets a bad wrap across the country for their bad defenses, but the conference is having a good year and showing good depth from the top five teams so far this season. Oklahoma and Oklahoma State both control their own destiny and if either of them wins out they will likely get into the College Football Playoffs.

Here is a look at the top 4 teams: 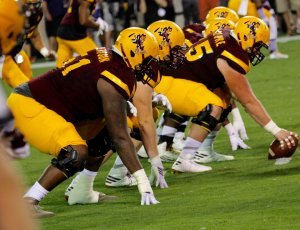 The Pac 12 looks like they will be on the outside looking in at the playoffs once again after Oregon fell to Stanford leaving no undefeated teams left in the conference. Arizona State and Oregon both need to win out in impressive fashion to have a shot to get into the CFP and right now I could see Arizona State would be favored to win that game on a neutral field. Herm Edwards has done a great job recruiting and the Sun Devils are atop of the Pac12 South standings and are 5-1.

The ACC is not dead yet as the Demon Deacons are 6-0 and sitting in first place in the ACC heading into week 7. All eyes turned away from the ACC after Clemson’s slow start, but Wake Forest has a favorable schedule and could end up running the table and leave the CFP committee with the difficult decision of whether to include them in the Playoffs.

The Bearcats could finally be the first non-power 5 team that finally breaks through and makes it into the College Football Playoffs this season. Cincinnati is ranked third in the country and only has one tough game left in late November vs. 23 ranked SMU. Cincinnati needs to continue to win in an impressive fashion and hope for the other conferences to continue to beat up on one another.

If you want to get in on the College Football action this weekend be sure to check out our up to date Betting Offers Page.