Current UFC Light Heavyweight champion Jan Blachowicz looks to mount a second title defense against Glover Teixeira on Saturday when it returns to “Fight Island,” Abu Dhabi for UFC 267. Below we’ll break down the betting odds for this fight as well as the co-main featuring Petr Yan and Cory Sandhagen and anticipated undercard Jingliang vs. Chimaev. 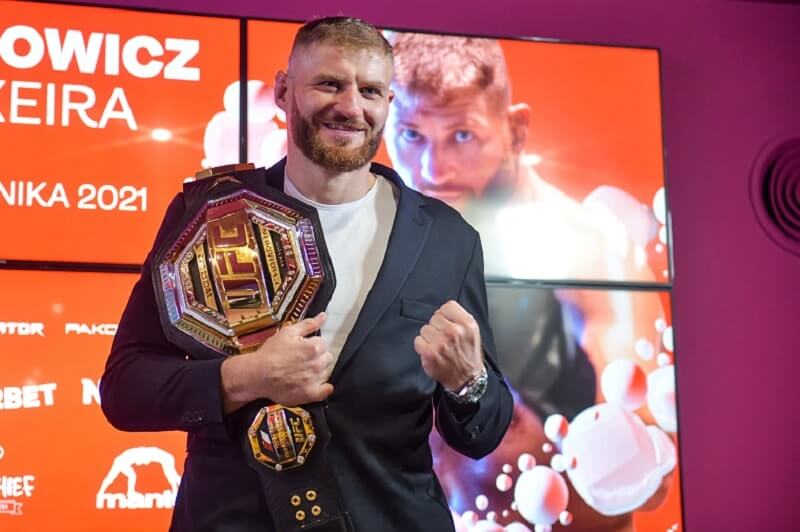 On Saturday the 38 year old Jan Blachowicz will look to do something only the best Light Heavyweights in UFC history have done. Defend the belt more than once. In fact, only Frank Shamrock, Tito Ortiz, Chuck Liddell, Daniel Cormier, and most recently, Jon Jones have held onto the belt for more than one title defense.

After defeating Israel Adesanya back in March for his first defense it’s now time to face off against a 42 year old Glover Teixeira who in all likelihood will be getting his last chance at a title fight. Teixeira is finally making his return to the Light Heavyweight Championship after losing to Jon Jones on a unanimous decision way back at UFC 172 in 2014.

The Brazilian may be late into his career, but hasn’t seemed to lose a step yet. He’s riding a five fight win streak. Still, the money is coming in heavy for Blachowicz and he currently stands as the favorite with -305 odds.

With Glover currently at +240 those odds are too good not to take. Blachowicz isn’t unbeatable, in fact, he’s already lost eight fights. These odds are a likely reaction to a few things. One Teixeira’s age. Yes he’ll be 42 when this fight happens, but Blachowicz isn’t young either at 38. Two is recency bias. The whole UFC world saw Jan defeat Israel in an upset. Look to buck the trends, this won’t be as clear cut as the online sportsbooks would want you to believe.

The Co-Main features another title fight between Bantamweight’s Petr Yan and Cory Sandhagen. Both of these fighters are seen as strikers, but Yan’s grappling and ground game is vastly superior to the pure striker that is Sandhagen.

Sandhagen is an underdog coming in at +190, compared to the favorite, Yan, at -235. One big reason for this is preparation time. Sandhagen was only tapped to be a replacement for this fight about 40 days in advance. This gives even more advantage to Yan who had a full camp to prepare.

When you get into the stats, replacements win fights only about one-third of the time. When you combine the preparation time with Yan’s multi-faceted ability it only seems logical that he’ll easily take the win in this matchup.

Outside of the two fights listed above, this has to be a crowd favorite. The Chinese fighter Jingliang has only gotten better with age growing from a ground specialist to a brawler with knockout power.

Chimaev, the undefeated Swede by way of Chechnya, has been tapped by many to be the eventual champion in the welterweight division. A masterful wrestler and big bodied, powerful striker, Chimaev has been known to end fights quickly. The heavy favorite going in will be Chimaev who currently has -590 odds compared to Jingliang’s +425. If you plan on betting Chimaev your best bet is to take a round prop or winning method. Something like Chimaev in the first at +120, or Chimaev to win by submission +200.

Get the most out of your bets with our Betting Offers Page. There you’ll find the best operator promotions and deals that include things like free bets and complimentary betting credits. Here’s a look at some of those great bonuses below.

Two belts are on the line for UFC 275 as Glover Teixeira ...