The MLS has been around since 1996 and whilst this meant American clubs joined the football party exceptionally late, we’ve still seen some legendary figures swap Europe for the United States — with David Beckham and Zlatan Ibrahimovic just two of a long list of superstars who have found their way across the Atlantic. 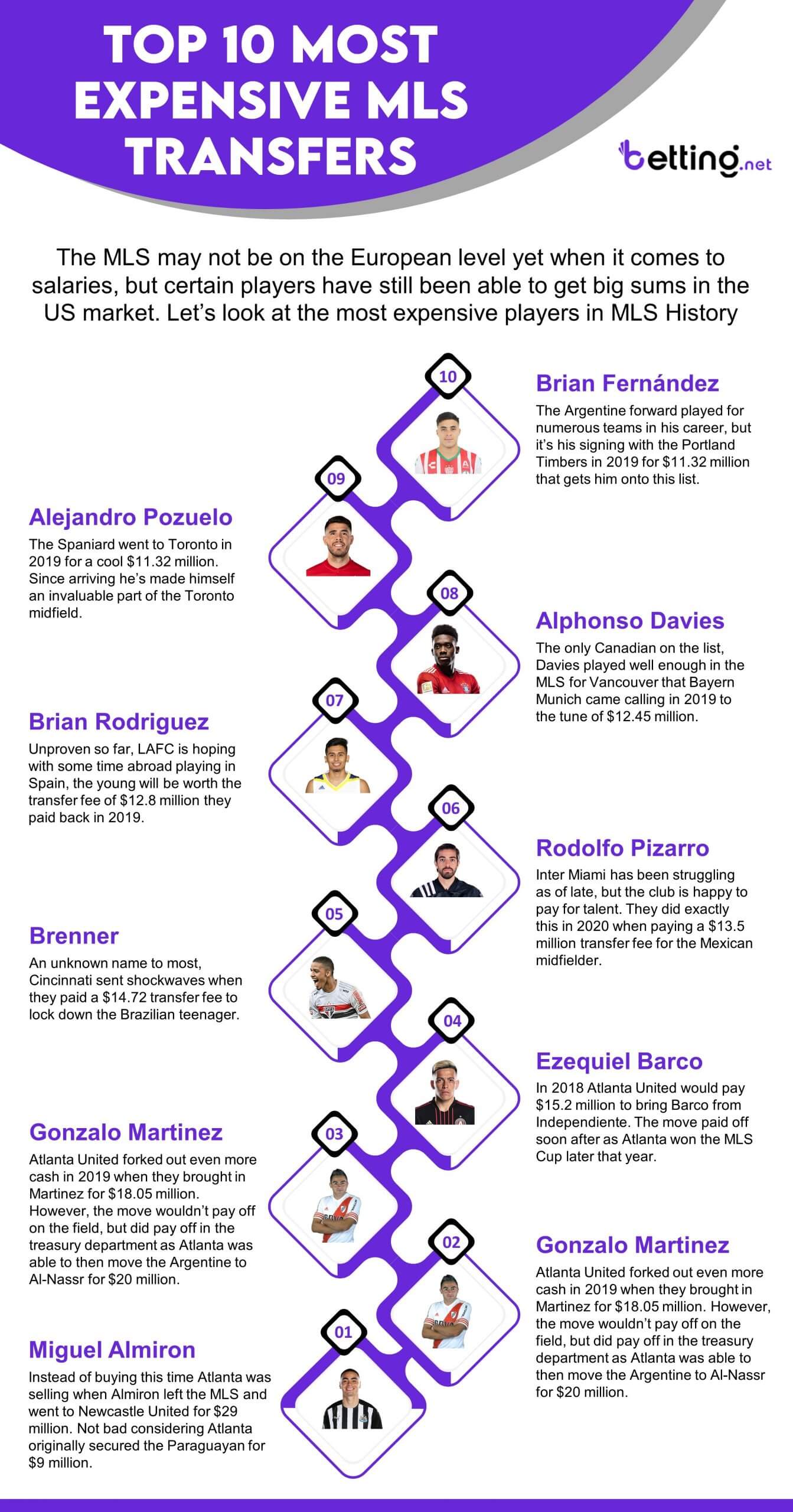 However, many of the names like Andrea Pirlo and Steven Gerrard joined the MLS as free transfers, meaning the majority of the most expensive transfers in MLS history have happened in the last few years and predominantly from South American clubs.

Below, we take a look at the 10 most expensive signings in MLS history and a look at how the players fared when they reached their new homes.

If a player with two Premier League medals signed for less than 10 million for a club in Europe, he’d have been looked at as an absolute bargain. However, Javier Hernandez did just that in the MLS, when he swapped Sevilla for LA Galaxy — and what a bargain it’s turning out to be.

The Mexican has had an illustrious career in Europe and he is continuing this incredible form in California, as he fires them in for the Galaxy.

At a slightly more expensive price than that of the legendary Mexican striker, we have his compatriot, Alan Pulido. The experienced forward took awhile to establish himself as an elite force, but just like Hernandez, Pulido found his form for Guadalajara and soon saw himself get a big-money move elsewhere, as he joined Sporting Kansas City for $9.9m.

Pulido is another prime example of just how easy it is to overlook the players who ply their trade in America. In fact, prior to joining the MLS, the Mexican netted 88 times for clubs in Mexico and Greece, spanning throughout his 20s. He also netted five times in 13 games for his country, which helped justify the hefty price tag for Sporting Kansas.

In line with the popular trend in the MLS transfers, we have another Mexican who has an excellent background in hitting the back of the net in his homeland: Brian Fernandez.

​​The forward has moved around frequently during his career, with loan moves away from Racing Club taking up three years of his career. This included 11 goals in 12 games from Primera Division side, Union La Calera, before this impressive form in Chile forced the move to the top tier in Mexico, where Fernandez netted 16 goals from 30 games.

Portland Timbers picked him up soon afterwards for $9.9m, where he scored 11 goals from 19 fixtures, making him one of the Timbers’ best players in the 2019 season. However, the success was short lived, and his contract was terminated not long after due to conflicts between him and the MLS side.

As we move closer to the number one spot, the first and only European on this list makes his way into the top 10, after Alejandro Pozuelo swapped Genk for Toronto in 2019.

This move certainly was one of Toronto’s best in recent times and although Sebastian Giovinco remains the Canadian outfit’s greatest European arrival, Pozuelo, alongside the Italian, became the only man to ever win the MVP award for Toronto.

A great signing and further proof why some European names should consider a move to the States.

Brian Rodríguez is one of the younger names on the list and a player who joined Los Angeles FC as a relatively unheralded Uruguayan, which forced some questions as to why they paid $11.5m for him. 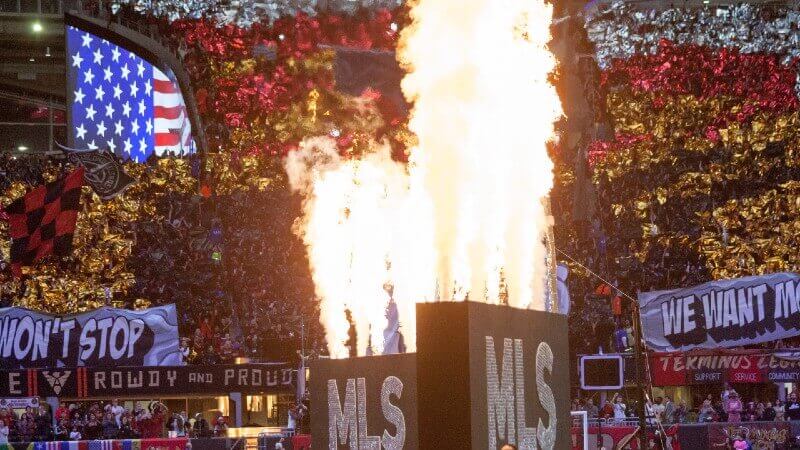 This one is an investment for LAFC, however, with a loan move to Almería in Spain following shortly after to gain more experience and despite three goals in 10 games for his nation, the likes of Carlos Vela are set to keep him out of the starting XI in California for now.

As an 18-year-old prodigy, Talles Magno joined New York City for $12m as yet another South American expected to take the MLS by storm in 2021.

The Brazilian has since made a few appearances in the MLS in this year’s campaign and is looked at as part of the future of NYCFC, and time will tell if this was a failed project or money well spent.

Rodolfo Pizarro spent his years in his native Mexico where he built up a reputation as a goal poacher and a creative outlet just behind the striker.

Like Hernandez, Pulido and plenty of other Mexicans in the MLS, Pizarro was forged in the Guadalajara ranks, but it was Inter Miami who sealed his signature from Monterrey, and he got off to a flyer with four goals for the inaugural MLS side in 2020.

Things have seriously slowed down for him in 2021, as Inter Miami look destined to finish bottom of the Eastern Conference.

FC Cincinnati took the MLS market by storm when they made the jump to the top flight with a few signings snatching the headlines, one of which was Brenner of Sao Paulo, who made a name for himself with 13 goals in 32 games for Brazil’s U17s.

With plenty of well-known names coming out of the Sao Paulo ranks down the years, Brenner could be another superstar to join this famous list, but instead of waiting for Europe, the Brazilian opted for the MLS.

As part of the South American contingent that joined Atlanta United in the year of 2018, Ezequiel Barco helped win the MLS Cup for the Georgia outfit in that year and proved why they spent so much on him.

No doubt Barco fulfilled his price tag initially, and with this $13.5m figure helping to win the MLS Cup, at just 22, the Argentine shows why we shouldn’t always overlook the MLS talent.

Out on his own with a price tag of $15.95m, Gonzalo Martinez signed from River Plate back in 2019 as Atlanta aimed to continue their flow of South American talent and defend their MLS Cup trophy. Such a move was all the more essential given the decision for Miguel Almiron to move to Newcastle United.

The Argentine was, however, a massive disappointment. Martinez scored just five goals in his debut campaign and failed to fill Almiron’s shoes, which forced Atlanta to cash in on him and sell to Al-Nassr in Saudi Arabia for a reported $18m.

This did mean Atlanta likely made their money back, but the midfielder was completely unable to make the move into the big time from South America to the MLS.

We’ve all been there. It’s a pivotal moment in the big game. ...

DraftKings Bonus
20% up to $1000
T&Cs apply
0/10
Go to Sports Betting Bonus Comparison
Latest News
NFL Wild Card Betting Guide: Raiders at Bengals
The Cincinnati Bengals host the Las Vegas Raiders ...
NBA Weekend NBA Preview, Games to Watch, Standings Update, Finals Odds
The NBA trade deadline is less than four ...
NFL Wildcard Preview: Arizona vs Los Angeles Rams
Last week these two teams battled out the ...
NFL Wildcard Preview Bucs vs. Eagles, Prop Bet, What to Watch For
The Eagles and Bucs face off Sunday afternoon ...
Run It Once to leave EU behind as it strengthens US expansion
Run It Once Poker has become a stalwart ...
More Sports
Top Betting Sites
Get the latest updates in Sports and Casino via our Newsletter