FanDuel Review
Nothing Found
About betting.net
Betting.net / News / The 10 Most Ridiculous Things Famous Footballers Waste Their Money On

We all love them, glorify them and boost them into the realms of celebrity status: football players are without a doubt some of the most adored people on the planet. Some of our heroes come to our attention through their somewhat unruly behaviour in public, others because the celeb gossip sites can’t help reporting on how they spend their money. With houses, cars and private islands high on the list it seems.

Here at Betting.net we follow football carefully and it comes to our attention whenever there is a particularly outrageous suggestion. So, for your entertainment (and to set a few facts straight) here is a list we thought our readers may find interesting…

Ronaldo just seems to have this knack of popping up all over the place, not to mention hundreds of lists and here he is once again. Ronaldo’s obsession with collecting gold is not new news. Any football fan worth his (or her) salt knows all about his golden balls and boots.

The Lambo is not body wrapped, we are talking real gold-plate. The spec is pretty tasty too: 6.5 litre V12, 700 bhp, capable of 0-60 in 2.9 seconds with a top end of 219 mph. But that’s rather old school it seems, a toy now discarded in favour of an £8.5 million Bugatti La Voiture Noire, aka ‘The Black Car’ which is one of a limited edition of ten with a spec so ludicrous that it’s barely road-legal.

From the sublime to the garish, tasteless, obscene – all of which have been used to describe El-Hadji Diouf’s golden Cadillac Escalade SUV. This is a man who does not have golden balls and owns a car that is body-wrapped to achieve its shiny gold finish. In addition to the Cadillac, Diouf has also invested in an equally lairy chrome-plated Mercedes-Benz SLR McLaren which is a tad easier on the eyes, but not much.

Unfortunately, Diouf is a rather attention seeking individual and made himself unpopular with players and management alike during his time at Anfield and elsewhere. Never mind his behaviour on the pitch, his self-styled ‘bad boy’ attitude was never popular off-pitch either.

Ex-Arsenal defender William Gallas is another man with a passion for silver and also owns what seems to be a footballer’s favourite, a gaudy silver-wrapped Mercedes-Benz SLR McLaren, which set him back around £350,000.

Trying to keep on the down-low, Mario Balotelli actually drew significant attention to himself with his habit of turning beautiful cars into monstrosities using a variety of camouflage wraps. The most shocking was his insistence on body-wrapping a $160,000 Bentley Continental in army green camo.

Islands in the sun… 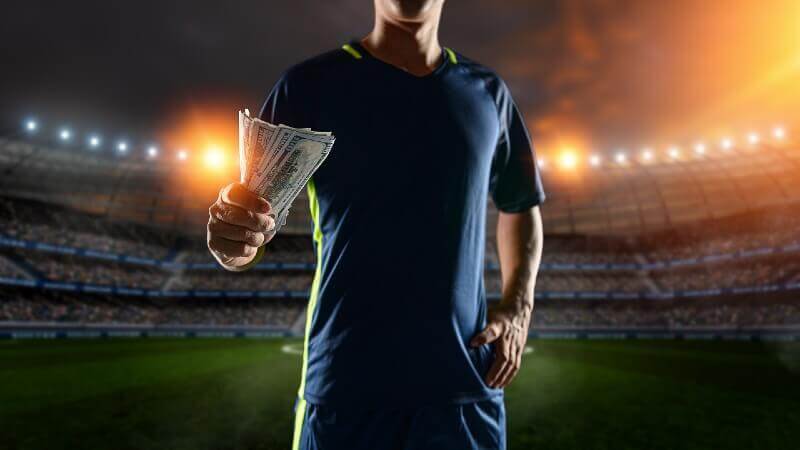 We feel rather bad for Obafemi Martins, who grew up in Ajegunle, one of the most notorious slums in Lagos, an area where a lot of football talent has been unearthed. You are not considered ‘poor’ there if your income exceeds £360 per year. So just imagine going from that to £75,000 a week.

Obafemi made mistakes during his time with Newcastle. He thought he could buy the world, but fell foul of overstretching himself on buying a house in an exclusive footballer gated community and trying to keep up with his much richer team mates (who also had better agents). The long and short is that Obafemi Martins did not rent a private island for a party and perhaps the gossip columnist who started that rumour got him confused with rap star Jay-Z.

Now, one footballer who did rent a private island is Gareth Bale. That was back in 2016, but he’s doing it again this year. The first time was to propose to Emma Rhys Jones but this time it’s for their wedding – how sweet is that?

The island in question is called Tagomogo and it lies just half a mile off the coast of Ibiza. At an estimated cost of £130,000, Gareth will enjoy a week or two of complete privacy and tranquillity following the nuptials. He’ll need it too, with a superstar celeb wedding guest list and the SAS available by land, sea and air to protect them. Stressful times.

Our third islander is AC Milan superstar Zlatan Ibrahimovic. Not content with simply renting, Zlatan bought his. To be fair, this one, called Davensö, is not in the sun, or rarely. It lies in the middle of a Swedish lake and covers roughly 1200 acres of assorted terrain and has a few ‘modest’ properties.

The reason for the purchase you might wonder? Davensö island itself is teeming with wildlife, including wild boar and the lake that surrounds it is not low on some rather tasty fish either, so Zlatan thought it would be a rather cool place to entertain his buddies. At a cost of around £2 million, makes for an expensive day out!

An Englishman’s home is his castle…

Not quite a castle, a stately home would be the apt description for Frodsham Manor in Cheshire. With the £2 million purchase of that property, French football hero Djibril Cisse also acquired the title of “Lord of the Manor of Frodsham”.

Even though feudal laws are a thing of the past, Djibril made a bad start as overseer and made a real faux pas by banning the Cheshire Hunt from making use of hundreds of acres of land they had previously had free rein on. It seems that the natives got rather restless, because it was less than 5 years before the property was back on the market.

At one point in his career Lionel Messi lived in the Castelldefels area of Barcelona. At the time his kids were young and his noisy neighbours were consistently disturbing the peace with their loud parties.

Did Messi complain in a neighbourly way? Did he move? No, he did neither, he simply put his hand in his very deep pocket and bought them out, to the tune of £5 million. Haven’t we all wished we could do something like that?

The smile says it all…

Brilliant Brazilian player Ronaldhino was notable for something beyond his exceptional football skills and his goal victory dance – his teeth. Well known for expressing his pleasure with a huge grin, Ronaldhino’s teeth were not a pretty sight, something he had been mocked about most of his life.

The resolution he chose was to opt for extensive dental surgery to have his gums and teeth reconfigured, at a cost of £36,000. Although that was reported as ‘extravagant’, frankly, we at Betting.net don’t find it ridiculous at all.

Monza, known as the “temple of speed”, is where the Italian Grand ...

We’ve all been there. It’s a pivotal moment in the big game. ...