If you blinked, you missed the 2021 NFL season. It feels like we were gearing up for another year of football just yesterday, but Super Bowl LVI officially marked the end of the 2021 season. The game capped a historic run of playoff games that has a chance to go down as the best postseason in at least the past 30 years. In the end, the Los Angeles Rams remained standing, dropping the upstart Cincinnati Bengals 23-20 in a nailbiter. Let’s reflect on the game.

Head over to our Strategies Page for some tips if you want to get in on the betting action for football. 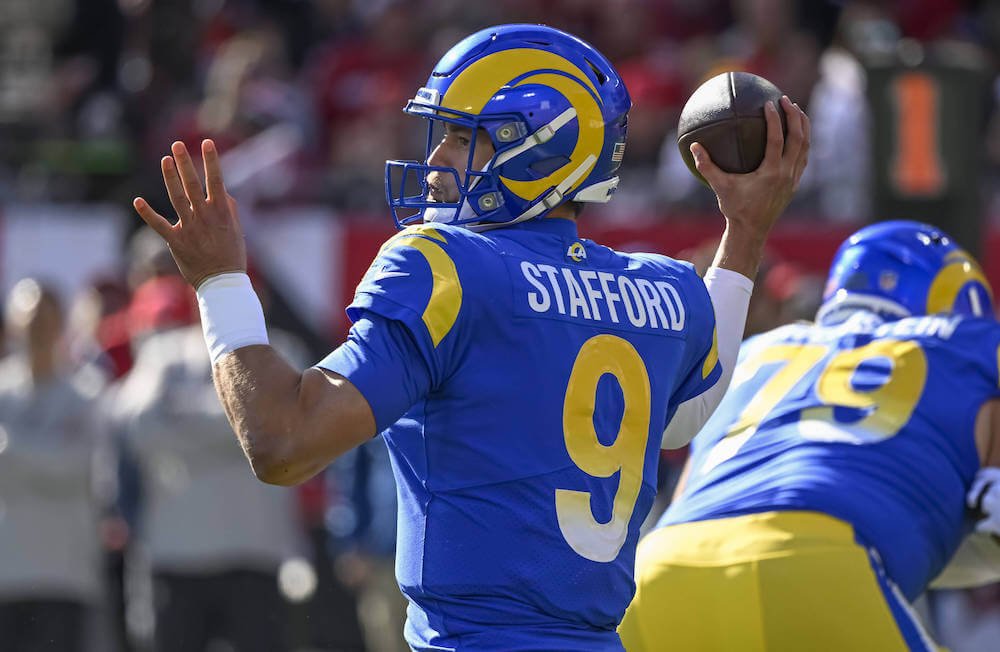 Matthew Stafford made some mistakes, but the Los Angeles Rams scored in the clutch to capture the Lombardi Trophy.

Los Angeles took an early lead as Matthew Stafford and Odell Beckham Jr. took advantage of Cincinnati turning the ball over on downs. From there on, the Bengals and Rams matched each other stride for stride. The teams would go several series without scoring only to sandwich scoring possessions back-to-back. The only two-score lead of the night (held by Los Angeles) lasted for just over seven minutes.

The Rams seemed to have momentum until things came crashing down before halftime. Joe Mixon threw a six-yard touchdown to Tee Higgins, trimming the lead to three points. A few plays later, Beckham suffered a significant knee injury that prevented him from returning to the game. Stafford got the Rams into Bengals territory, but he threw an interception to Jessie Bates III in the end zone.

Cincinnati came out guns blazing in the second half. On the very first offensive play, Joe Burrow connected with Higgins for a controversial 75-yard score against Jalen Ramsey. A few plays later, Ben Skowronek tipped a pass right to the hands of Chidobe Awuzie. The Bengals scored a field goal, building a 20-13 lead.

At that point, the Rams could’ve rolled over. Cincinnati had all of the momentum. Los Angeles couldn’t run the ball, the Bengals were smothering Cooper Kupp, and Cincinnati’s defensive line was putting pressure on Stafford. Credit the veteran quarterback and McVay’s coaching staff for not panicking. The Rams immediately answered with a field goal of their own, bringing the score to 16-20.

Seven consecutive punts followed as both defenses stiffened. The Rams couldn’t get anything going on offense, and McVay’s dedication to the running game was killing drives. However, Aaron Donald, Leonard Floyd, and Von Miller came alive. They accounted for five of the defense’s seven sacks against Burrow. The often discussed battle between the Rams pass rush and Cincinnati’s offensive line finally became a factor.

Finally, Stafford got the ball with 6:13 left in the fourth quarter and led a go-ahead drive dominated by Kupp’s Super Bowl MVP performance. Los Angeles took a 23-20 lead with 1:25 remaining. The Bengals had a chance to tie or force overtime, but Donald forced an incompletion on fourth & one, ending the game.

Check out the latest odds and props for any upcoming football games.

Next year’s Super Bowl airs on Feb. 12 in Glendale, Arizona. There’s almost always a surprise contender, but next year already looks like it belongs to the AFC’s youthful teams. Let’s look at the top contenders for next year’s championship.

Cincinnati stands to take the biggest step back in free agency, potentially parting ways with Riley Reiff and Quinton Spain along the offensive line and B.J. Hill and Larry Ogunjobi on the defensive front. The real blow would come if the Bengals lose former All-Pro safety Jessie Bates III.

Despite these potential losses, Buffalo, Cincinnati, and Kansas City should emerge as by far the three most likely AFC teams to reach Super Bowl LVII, with the Bills holding a slight advantage due to losing fewer players in free agency.

Baltimore and Tennessee lag behind as AFC teams in need of internal reworking.

Tampa Bay risks dropping off the map in 2022. The organization, which finished second in the NFC regular season race behind Green Bay, recently lost Tom Brady to retirement and could fail to retain as many as nine starters.

The Packers are also set to take a massive step back. Aaron Rodgers could force a trade out of Green Bay, and First-Team All-Pros Davante Adams and De’Vondre Campbell are unrestricted free agents in need of massive raises. Rumors claim Adams could want $30 million per year on his new deal. That’s unfathomable for a Packers team projected to go over the cap.

The void opening atop the NFC heavily favors the NFC West, which featured three playoff teams this season. Los Angeles is on the hook for eight free agent starters, including Beckham and Miller, but the franchise will survive as long as McVay sticks around.

San Francisco is on pace to lose several mid-level starters while Arizona could suffer from a veteran free agent exodus.

Keep an eye on the Cowboys sneaking into the Super Bowl discussion in their weakening conference. Dallas has a much easier path to Glendale than any AFC team or the crowded NFC West field, so long as Mike McCarthy gets out of his own way.

On the morning after Super Bowl LVI, I think the Bills and Rams have the weapons to reach the championship game in 2022.

Looking at the early bets

Check out the best football betting sites for the current NFL season. Feel free to explore betting on other leagues and sports.