The SEC heads into week 8 with both divisions still up for grabs but Georgia and Alabama are heavy favorites to come out of the East and West Divisions. With the other conferences suffering some setbacks in recent weeks this could be another year that the SEC gets two teams into the College Football playoffs once again. Most of the conference has a bye this week but there are a few intriguing matchups.

To get in on the SEC action this weekend head on over to our Offers Page for the most up-to-date promotions and sign-up bonus offers. Ole Miss has a big matchup at home against LSU

Ole Miss and LSU are two old rivals that will meet up in Oxford for another big SEC matchup this weekend. Ed Orgeron is being pushed out after the season end but is being allowed to finish the season as LSU coach which gives this game an interesting dynamic. Orgeron coached at Ole Miss from 2005-2007 and LSU has always played Ole Miss tough with Coach O at the helm. This could be a dangerous game for Ole Miss as LSU will be playing loose and the LSU coaching staff will likely have a very aggressive game plan as they have nothing to lose. I like Ole Miss to pull ahead late in this game but I think LSU covers the spread and Ole Miss wins a high scoring game with a final score around 41-35.

Tennessee heads down to Tuscaloosa after a heartbreaking loss against Ole Miss last weekend and is not getting much respect from Odds Makers as they head into the game as 25 point underdogs. The Crimson Tide look to have recovered from their loss to Texas A&M and dominated Mississippi State 49-9 last week as they look to get on a roll before their potential matchup with Georgia in the SEC Title. Tennesse has the type of offense that has given Alabama trouble over the years and I think they will be able to put up some points on the Crimson Tide Defense. I think Alabama wins this one 42-21 with Tennessee covering the spread. 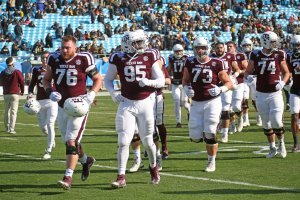 The Aggies are finally hitting their stride after a slow start and still have an outside chance to win the SEC West if Alabama falters one more time in Conference and they win out.  Jimbo Fisher got questions this week about the LSU opening and his response was one of the most convincing from a coach that I have seen that looks content where they are at. At Texas A&M Fisher will be a hero if the Aggies win 9-10 games a year and have an occasional breakthrough year every now and then. At LSU fisher would be expected to have LSU in the College Football Playoffs next season which wouldn’t make sense as a lateral move.

Two SEC quarterbacks have the highest odds to win the Heisman Trophy heading into week 8 as Matt Corrall from Ole Miss and Bryce Young from Alabama are sitting at +200. Corral should put up better numbers than Young down the stretch but the big concern for Corral will be if Ole Miss can win enough games to stay in the national discussion. If Ole Miss can run the table and go 11-1 or 10-2 he has a great chance to bring the Heisman trophy to Oxford.

Georgia still has the best chance of winning the national championship according to oddsmakers as they sit at  +130 but Alabama is right behind them at +225 with the second-best odds. If Alabama runs the table and is able to beat Georgia in the SEC title both teams have a good shot of being included in the top 4 and we could be looking at another 2018 scenario where Alabama faced off against Georgia in the National Championship.

Head over to our Betting Tips page for a breakdown of betting strategies that you can put into place for SEC week 8.