The biggest story in college football in Week 6 was Alabamas shocking loss to Texas A&M on the road in College Station last week. Alabama was 18 point favorite heading into the game and the Aggies had shown signs of inconsistency all season long so no one thought they had a realistic chance at the upset.

Texas A&M is one of the few teams in the conference that has the athletes on the offensive and defensive lines to hang with Alabama and did a great job of controlling the clock with their rushing attack and were able to pull off the shocking 41-38 upset.

As always, be sure to check out our offers page for the most up-to-date list of operator sign-up promotions. 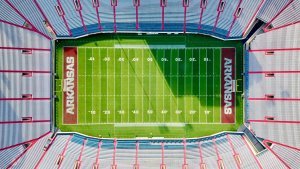 Arkansas suffered a heartbreaking 52-51 loss to Ole Miss last week and will look to rebound against Auburn, who is also coming off of a tough loss to Georgia at home. Both teams really need this game to stay in contention in the conference for some of the top-tier bowl games and it should be a good game as both teams have very similar styles. KJ Jefferson has come on strong over the last couple of weeks at QB for the Hogs and I think he will be the difference-maker in this matchup.

This could be the final weekend with Ed Orgeron as the LSU head coach if the Tigers drop this game to the gators. Despite winning the national title in 2019, Orgeron has failed to get the Tigers to live up to the lofty expectations that LSU expects from their football program. At LSU the expectations are to win a minimum of 10 games each year and Orgeron looks to be staring into another .500 type season which won’t cut it for the LSU power brokers in Baton Rouge. I like Florida to win this game in a blowout.

Kentucky has been the story of the SEC so for this year after their 6-0 start and string of consecutive wins over Florida and LSU. They are 21 point underdogs on the road at the top-ranked Georgia team, who will be motivated to send a message that they are the top team in the East. I think Kentucky will keep this game somewhat close through the first few quarters but Georgia has too much depth and will likely wear down Kentucky’s defense in the second half and be able to come away with a victory. Ole Miss is riding high after a big win over Arkansas last week and is sitting in a good position to finish as the second team behind Alabama in the SEC West which could bring a big New Years Day bowl game with it. Lane Kiffin returning to Tennessee where he infamously left the Vols after one year is another interesting story in this matchup Tennessee has looked good on offense recently and this could be a trap game for Ole Miss. I still think Ole Miss has too many weapons on offense and should be able to outscore Tennessee in this one. I like the Ole Miss to win this one something like 38-31.

If you want to get in on the SEC action this weekend and are looking for some betting tips and strategies visit our Odds Comparison page for a detailed breakdown. 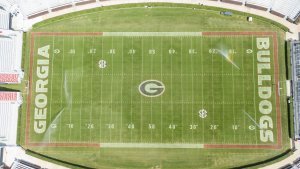 Georgia is the favorite to take home the national title

With so many moving parts week to week and still 6 weeks left we could have plenty of moving parts but here is a stab at where each SEC Team could be headed at the end of the Season:

Plenty could change over the last six weeks but the SEC has a great shot at getting two teams into the CFP if Alabama can run the table and beat Georgia in the SEC title game. If Georgia wins, you would likely see Cincinnati getting into the CFP and Alabama falling to the Sugar Bowl.