All eyes will be on a cornfield in Iowa Thursday night as the New York Yankees take on the Chicago White Sox in MLB’s ‘Field of Dreams’ game. The temporary field was built near the property used in the 1989 film Field of Dreams. 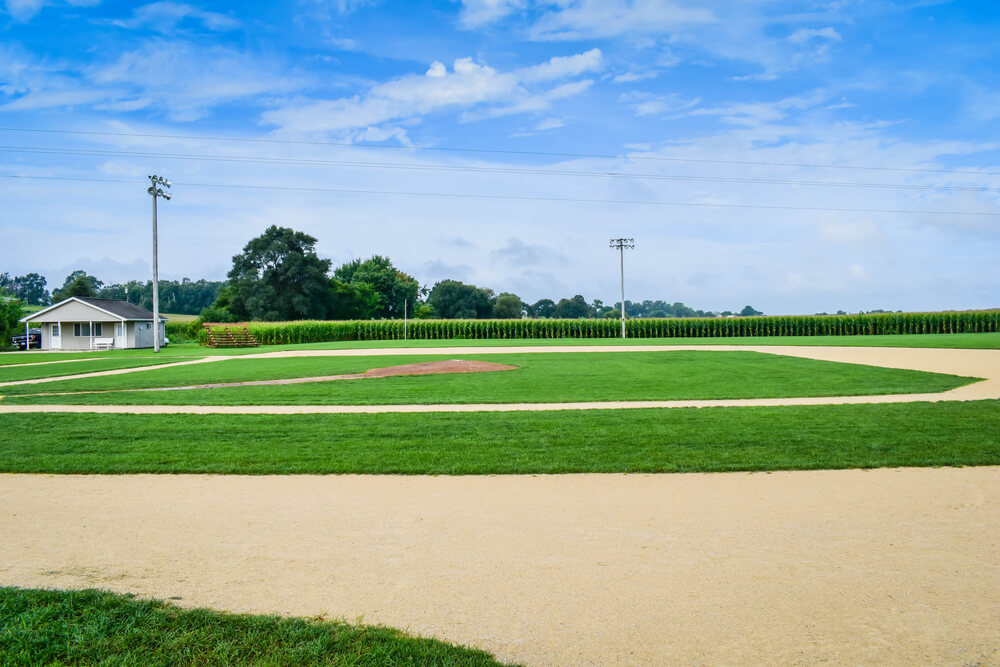 The field is positioned in a cornfield, only a short walk away from the original field in which the movie was shot (Brett Welcher/ Shutterstock)

The 8,000 seat ballpark was built specifically for this game in Dyersville, Iowa when it became apparent that the field used in the film wouldn’t be viable. It lies within a 159 acre cornfield. Stands were built down the first and third baseline and just past the left and right outfield fences lie some of those dense stalks of corn.

Further out in right field a corn maze was built in the shape of Major League Baseball’s logo. The dimensions of the field itself are no different than a typical ballpark, 335 feet down either line, and 400 feet to center field.

This of course, is all based around the 1989 film Field of Dreams which itself was based on an adaption of W.P. Kinsella’s 1982 novel Shoeless Joe. The film follows Ray Kinsella (Kevin Costner), and his family on their Iowan farm. One evening when walking through the corn Ray hears a whisper telling him, “If you build it, he will come.” He then sees a vision of a baseball diamond in the cornfield with “shoeless” Joe Jackson standing in the middle.

The rest of the movie is Ray’s struggle to keep his family farm and get the baseball field built with the help of those around him all while dealing with the guilt from an unresolved conflict with his now deceased father.

The film is a sentimental fairytale that blends baseball, and the struggles navigating familial relationships, and belief in something spiritual. It was nominated for three academy awards. In 2017 the Library of Congress’s National Film Registry selected the film for preservation. According to the Registry, films only receive this honor if they are “culturally, historically, or aesthetically significant.”

Instead of spirits on the diamond Thursday night will see the Yankees and White Sox wearing 1919 inspired throwback jerseys. Chicago is the designated home team, and New York away. This will be the first time an MLB game is played inside of Iowa. Left-handed pitcher Andrew Heaney will be on the mound for the Yankees, and Carlos Rodon, himself a lefty, will start for the White Sox.

The Yankees are currently 7 games back from the American League leading Rays in the AL East. They have won seven out of their last 10 and are playing better baseball since the All-Star break.

The White Sox have been dominating the AL Central and are a full 10.5 games ahead of the Cleveland Indians. We’ll be lucky to see not only two historic teams in this matchup, but two teams with great lineups looking to improve their positions with playoffs on the horizon.

The current DraftsKings odds have the White Sox (-170) as favorites for the matchup. However, it’s worth taking a good look at the underdog Yankees (+150) with their new pitcher on the mound. Heaney may have given up four runs in his pin-stripe debut, but he only surrendered four hits across six innings. For the best sign up offers, check out our guide for new customers.

When Thursday evening rolls around we will finally get to see what the MLB built in a corn field, and how many people come to the broadcast, televised on Fox.