What a wild finish to a wild Tokyo Olympics. An overall successful Olympic Games saw the United States take home a total of 113 medals. This number led the competition, and was America’s second highest total in over 30 years.

However, the gold medals were down from 46 in London and Rio to 39 in Tokyo. With five days left in the games the US trailed China 24 golds to 32. USA won eight golds in the last two days and ultimately passed China on the very last day of competition. China finished second in gold medals with 38, and second in overall medals with 88.

There’s still time to place your bets on these Olympic Games. Check out our Olympic betting guide.

American Allyson Felix won her 10th Olympic medal getting bronze in the Women’s 400 meter. Tying the 25 year old with Carl Lewis for most track and field medals in history. The five time Olympian was beaten by Bahamian Shaunae Miller-Uibo (gold) and the Dominican Republic’s Marileidy Paulino (silver).

The semi-final game pitted Team USA vs. Serbia, a match the Americans won handily. The game finished with a score of 79-59. Both Britney Griner and Breanna Stewart posted double-doubles. The game was not the American’s finest seeing USA only shoot 48.4% and committing 17 turnovers. Griner led the team in scoring with 15 and 12 rebounds, Chelsea Gray had 14 points, and Stweart had 12 with 10 boards.

April Ross and Alix Klineman became the first American women to win the gold medal since 2012. The duo dominated the sand and beat Australia 21-13 and 21-15 in a game that saw temperatures rise to over 110 degrees. The Swiss beat Latvia for bronze. 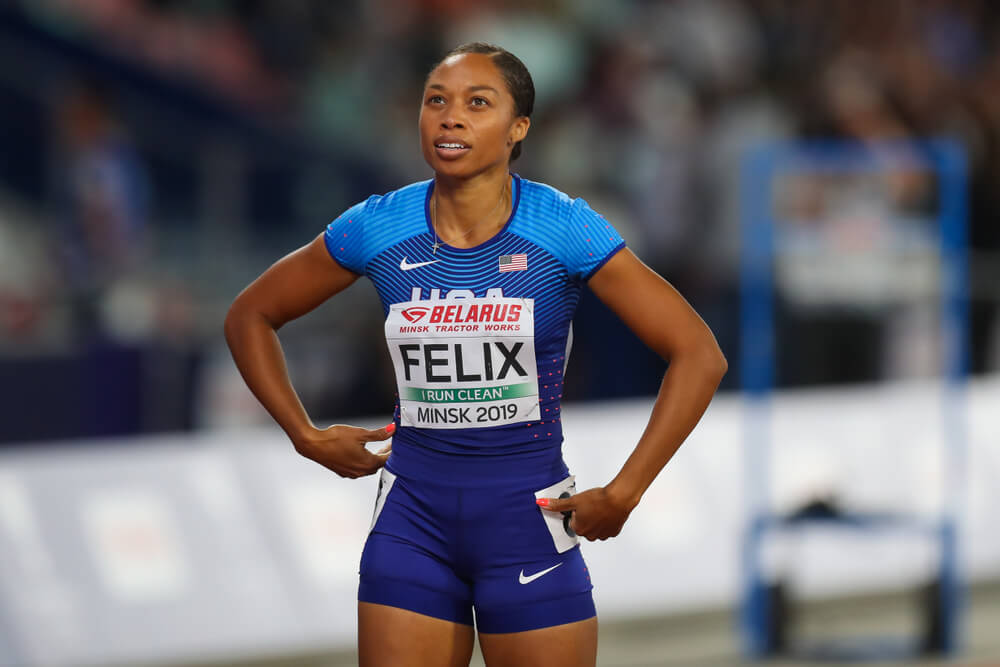 In 2020 Molly Seidel finished second in the Olympic Marathon trials, and sixth in the London Marathon. Her third ever marathon was in Tokyo in which she secured the bronze medal finishing 26 seconds behind gold medalist Kenyan, Peres Jepchirchir and Kenyan Brigid Kosgei. The 27 year old was working two jobs prior to the olympics had to say of her performance, “I wanted to go and be that person who, when you’re racing, they’re all saying, ‘Who the hell is that girl?’”

The American 4x400m relay team secured gold finishing a full four seconds ahead of Poland and five of Jamaica. The team consisted of Allyson Felix, Sydney McLaughlin, Dalilah Muhammad and Athing Mu. This medal is number 11 for Felix and makes her the most decorated American track athlete of all time. American women have now won this event in every Olympics dating back to 1996

Not to be outdone, the men’s 4x400m relay team consisting of Michael Cherry, Bryce Deadmon, Michael Norman, and Rai Benjamin also found themselves at the top of the podium. It would be the only sprinting medal for the American men. Netherlands and Botswana won the silver and bronze.

USA baseball was shut out in a 2-0 loss during its gold medal game against host country Japan. Japan used five different pitchers and gave up six hits in the contest. The U.S. team had runners in scoring position multiple times, but were unable to get them home. Second baseman became the third American to medal in the Summer and Winter Olympics. He also won silver in speed skating in 2014. Though perhaps disappointing for some, a silver medal is nothing to scoff for a team composed of minor leaguers, overseas players, and free agents.

Just as everyone predicted all along, USA came home with the gold medal in basketball beating France 87-82. The Americans got off to a rocky start losing to Nigeria and Australia in exhibition games, then France in pool play. USA held a lead for most of the game, but France stayed within striking distance, even narrowing the lead to three late in the fourth quarter. Kevin Durant finished with another dominant olympic performance scoring 29 points. Jrue Holiday and Khris Middleton became the fifth and sixth players to win an NBA title and gold medal in the same summer. This was Team USA’s fourth straight gold in basketball.

The American women’s water polo team handily beat Spain 14-5 for their third gold medal in a row. American goalie Ashleigh Johnson had an amazing save rate of 73%, compared to her Spanish counterpart’s 19%. “That’s why she’s the best,” said Coach Adam Krikorian when asked about Johnson’s performance. The American women beat host nation Japan 90-75 to secure their seventh consecutive gold medal. Britney Griner scored the bulk of the USA baskets with 30 points, A’ja Wilson followed with 19 and five blocks. Breanna Stewart did a little bit of everything scoring 14 points, pulling down 14 rebounds, and adding five assists, four steals, and three blocks. Diana Taurasi and Sue Bird each became the first basketball players to win five gold medals. For Japan, a team struggling with the size and skill of the American players, it was their first time medaling in the event.

Although it was the last gold medal of the games for USA, it was the first ever gold medal for USA women’s volleyball. The team beat Brazil in three straight sets. Overall the team had only lost one of it’s eight matches in Tokyo. Annie Drews led the U.S. scoring with 15 points, Michelle Bartsch Hackley had 14, and Jordan Larson scored 12.

Welcome to the first of our Olympic reports, where we will bring ...