Week 6 of the NFL season wrapped up on Monday Night with a thriller between the Titans and Bills with the Titans coming out on top 34-31 in a key AFC matchup.

Other notable wins were the Raiders bouncing back without Jon Gruden to defeat the Broncos, and the Cowboys beating the Patriots to get to 5-1. We are now more than a third of the way through the NFL season which is hard to fathom!

Let’s take a look at the updated Super Bowl Odds after week 6, MVP Odds, and Top Performers from Week 6 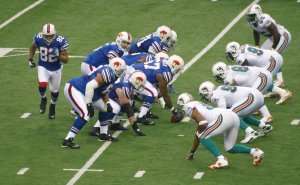 The Bucs are still the favorites after another impressive win over the Eagles on the road on Thursday Night. The Bills still have the second-best odds after their tough loss to the Titans. The Chiefs, Rams, Ravens, and Cardinals are right behind them as this looks to be one of the most balanced NFL seasons in recent memory with 10 or so teams that look like they could make it at the Super Bowl.

Here are the latest odds for the top teams:

The odds for the winning conference for this year’s Super Bowl are very close as well which speaks to how balanced the league is from top to bottom. While the Bucs have the best odds, the AFC is a little deeper top to bottom so you may get more bang for your buck betting on the AFC to take home the title this year:

The MVP odds also look like a total toss-up with all of the QB’s on top teams playing extremely well so far this season. With the new rules that penalize hard hits on the QBs, we should see each one continue to put up big numbers all season long and the MVP award will likely go to the Quarterback with the best record.

As of now I really like the winner to come down to Dak Prescott, Lamar Jackson, or Tom Brady as I think their teams have the best chance of winning their divisions and finishing up with the best records. 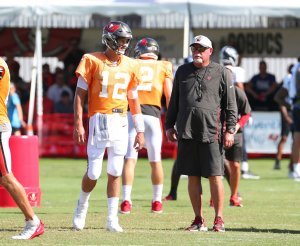 For the latest odds and promos be sure to head over to our Odds Comparison page.

NFL Coach of the Year

Two coaches that have stood out so far are Chargers coach Brandon Staley and Kliff Kingsbury. Staley is only 38 years old and has gotten the Chargers off to a great start.

Mike McCarthy is another name to keep an eye on as the NFC East looks awful this season and the Cowboys have a great shot to go undefeated in the division.

Coach of the Year Odds: Lamar Jackson has the Ravens on a roll at 5-1

One of the most hyped games coming into week 6 was the Chargers heading to Baltimore in a battle of AFC heavyweights but the game turned out to be a total dud as the Ravens controlled the line of scrimmage on their way to a 34-6 win. The Ravens have some of the best team speed in the league and should be 6-0 so it will be interesting to see if they can stay healthy as they look like the Super Bowl favorite on the AFC side right now.

Patrick Mahomes and the Chiefs bounced back with a big road win over the Washinton Football team with a 31-13 blowout win as Mahomes put up 397 yards and the Chiefs looked like the team we are used to seeing over the past few years. The Chiefs are 3-3 and are still a team no one will want to face throughout the rest of the season.

The Cardinals continue to be the store of the year so far as they went on the road as underdogs and controlled the game from start to finish in a 37-14 win. Kyler Murray threw for 229 and 4 TDs as he continues to build his case for the MVP award. The Cardinals have a favorable schedule and have a great shot to finish with the best record in the NFC.

If you want to get in on the NFL excitement this week head on over to our Offers Page and take advantage of the no-risk bet promos!