The Week 6 edition of Monday Night Football sees the 4-1 AFC standard bearer Buffalo Bills go on the road and take on the always dangerous 3-2 Tennessee Titans. Find the best legal online bookmaker available in your area and get the best tips on betting the spread, moneyline, and props including anytime touchdown scorer below. 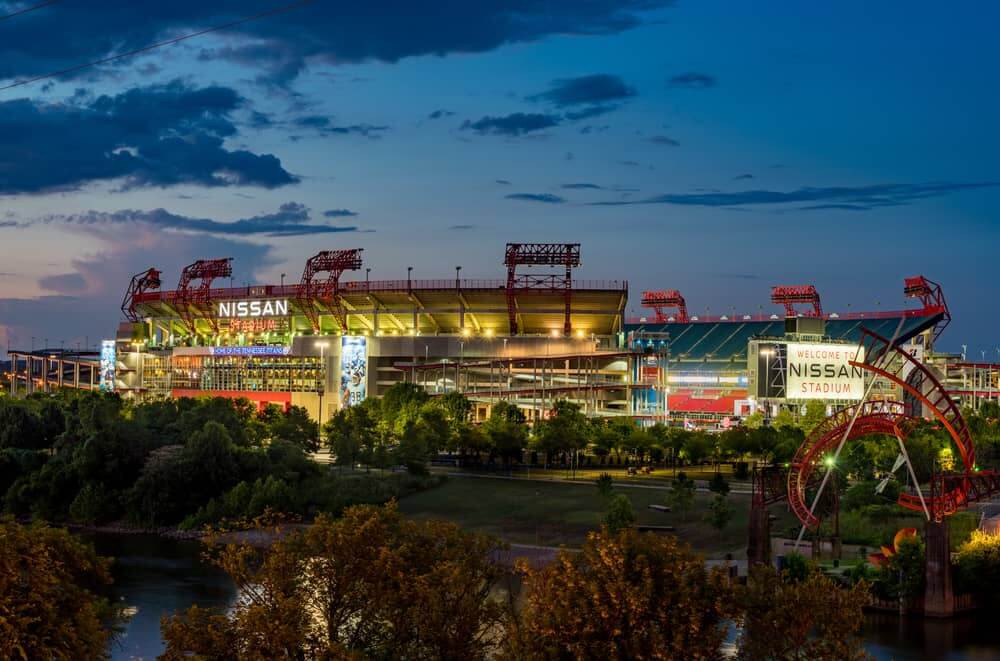 Nissan Stadium in Nashville, Tennessee hosts the Week 6 edition of Monday Night Football between the Titans and the Bills

This line has wavered quite a bit from 4.5 a week ago, up to 6, back down to 5.5 and has now settled at 6.5. The Bills are 4-0 ATS since their Week 1 loss to the Steelers. However, I think this game could be a bit of let down after Buffalo is coming off of a dominant 38-20 win over Kansas City on Sunday Night Football. This isn’t to say the Bills drop this game, just that to win by TD on the road vs. the Titans seems unlikely.

Add to that this is a Titans squad that will have Derrick Henry, A.J. Brown, and Julio Jones all on the field for the first time since Week 2. Henry is looking for his fifth consecutive 100-yard rushing game, and if the Bills look to stack the box and stop him, Tannehill has shown just how effective he can be off of play action going down the field to Jones or Brown.

The Titans show why they’ve been able to make competitive postseason runs in the past few seasons and keep things close at home. Take Tennessee to cover the spread.

We always look to give you best betting tips that you can take straight to the bank. For even more helpful betting tips check out our football betting guide.

Primetime games have largely been high scoring affairs this season which is why I’m surprised to see bettors bring this number down from 54. With that being said, the Bills defense has been stout, leading the NFL in points allowed per game (12.8), while putting up 35 points or more in their last four weeks. Still, it’s important to look at who they’ve played as the Dolphins, WFT, Texans or Chiefs have not been known for their defensive or offensive (besides the Chiefs) prowess this year.

On the flip side the Titans showed us the team they could be when healthy in Week 2. That’s when they went into Seattle and beat the Seahawks 33-30 in overtime. I think that’s the more likely version we get to see tonight. Look for points to get scored in this game and take the over as the Buffalo continues to score at will, and Henry pounds the rock.

Knox has become the red zone machine that Josh Allen has leaned on to the tune of five TDs over the last four games. He’s not just an endzone pass catcher either which gives him even better chances. Knox had over 100 yards receiving last week vs. KC. Look for him to pull down another big grab in the endzone tonight.

The Tennessee Titans have been absolutely riding the back of Derrick Henry this season. In a Week 1 blowout to the Cardinals he only had 17 carries. Since then he’s had at least 28 rushes per game and gone over 100 yards for four straight games. The Titans know their recipe for success, and it’s giving the rock to Derrick Henry. They’d be foolish to get away from it. Take the best pure running back of this generation to rack up another 100.

Are you looking to make even more money off of these picks? Look no further then our best betting offers page. Here you’ll find promos and deals from the top sportsbooks in your area. Below you can find an example of just a few of those great offers.

Week 13 is almost finished, but not before the AFC East’s top ...