We wrapped up week 5 of the NFL schedule last night with a sensational comeback by the Ravens over the Colts 31-25. Lamar Jackson threw for 442 and 4TDS as the Ravens outscored the Colts in the 2nd half to get to 4-1 and first place in the AFC North. The contenders are starting to separate from the pack the further we get into the season and it looks like we will have a major battle for the AFC and NFC playoff spots.

If you want to get in on the action with some NFL betting be sure to check out our promotions page for additional betting tips.

Let’s take a look at some of the rest of the top storylines from Week 5 and Updated Super Bowl and MVP odds. 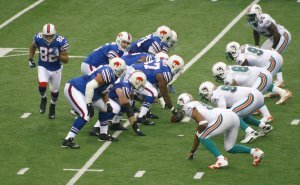 Josh Allen is the new leader in the clubhouse as the MVP favorite after another solid performance in a road win at Kansas City. With the rest of the AFC East looking like they will be in rebuilding mode Allen has a great shot to bring home the MVP title as he should continue to put up huge numbers. Here are the most recent odds:

These top 5 contenders are having epic seasons and the MVP race this year will take a historic statistical season with the way these QBs have started their seasons.

Packers get a big road win

The Packers got to 4-1 with an entertaining overtime win over the Bengals 25-22 after 3 field goal misses by Mason Crosby late in the game. The Packers had plenty of question marks after their week 1 loss to the Saints but they have put together four solid performances and look to be on their way to another NFC North championship and threat in the NFC serious playoffs. 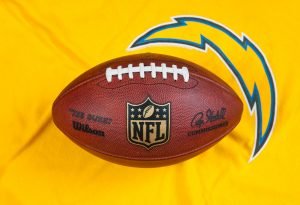 The Chargers and Browns played in what will likely be the most entertaining game of the NFL season that resulted in a 47-42 Chargers win. Both teams have a plethora of offensive weapons and could see each other in the playoffs later in the year. Justin Herbert threw for 398 yards and 4 TDs and put himself into the thick of the MVP conversation as the second-year QB out of Oregon looks like the potential future of the league.

The Bills went into one of the toughest places to play in the NFL and came away with a big 38-20 win over the Chiefs in a rematch of last year’s AFC title game. The Bills now have the 2nd best odds to win the Super Bowl at +600, only behind the Bucs.

Tom Brady continues to defy father time and had a big day over a familiar team in the Miami Dolphins as he threw for 411 yards and 5 TDS to put his TD total up to 15 on the season. If he keeps this pace up he could top his 50 TD total that he through for in 2007.

The Cardinals won a 17-10 defensive slugfest over the 49ers to improve to 5-0 as they head into a big road test this week at Week 6 at Cleveland. Kyler Murray 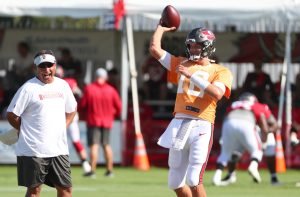 Tom Brady and the Bucs are the Super Bowl Favorite

The Bucs are the new favorite to win the Super Bowl as we head into week 6, followed closely behind the Bills as both teams are starting to stand out from the rest of the teams in their respective conferences.

A team to keep an eye on in the NFC is the Dallas Cowboys who have played very well each week and look like a lock to win the NFC East. The NFC looks absolutely loaded this year as each division has a team that you could legitimately see making a run to win the conference.

Here are the most recent Super Bowl odds:

The big story from week 5 was the sudden resignation of John Gruden from the Las Vegas Raiders after it was leaked that Gruden had sent a variety of offensive emails years ago. Gruden signed a 10-year contract to coach the Raiders during their transition to Las Vegas from Oakland.