Week 4 of the NFL season kicked off last night with the Bengals beating the Jaguars 24-21 as Evan Mcpherson nailed a 35-yard field goal as time expired to get the Bengals to 3-1.

The Bengals have been one of the big surprises this year and look like a real threat in the AFC North. The rest of the week 4 NFL action kicks off on Sunday in what looks like should be another great week of action. 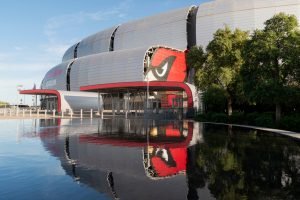 The Cardinals and Rams face off at Sofi stadium in LA this weekend in a battle of undefeated teams in a big NFC West matchup. The Rams looked great last week in a big win over the defending Super Bowl Champion Bucs, and Matt Stafford looks to be one of the best free-agent acquisitions in recent history.

Kyler Murray’s running ability should keep Ram’s defensive front off-balanced and allow for the Cardinals to move the ball on the Rams. This smells like a letdown game for the Rams and I wouldn’t be shocked to see the Cardinals pull the big road upset here.

Tom Brady returns to Foxboro this weekend as the Bucs face the Patriots in a game that will be tough for Patriots fans to stomach. Brady looks to have won the divorce between he and the Patriots as he has thrived in Tampa while the Patriots have struggled to find an offensive identity since Brady moved on.

I have the feeling that Brady wants to stick it to Bill Belichick and I think he will put up 40 points on the Patriots defense in a game that will have Patriots fans wondering how they ever let Brady getaway. 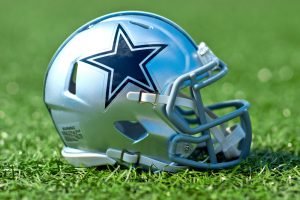 The Panthers are another team that has been a big surprise this season as Sam Darnold looks like a new man and is thriving in Carolina. The Cowboys have also looked good the last couple of weeks as their offense looks to be a step above the rest of their NFC East rivals.

The Panthers’ defensive front should cause some issues for Dak Prescott in this matchup, but I think the Cowboys have too many weapons offensively and should pull away from the Panthers late in the game at home.

Allen should have a huge day at home against the Texans, who look like they will be in the running for the #1 pick in the draft

The Packers are at home against the Steelers, who have shown some major holes on the defensive end. They will probably gear up to slow down Aaron Rodgers, which should open up Harris to have a big day.

The Bears will probably be looking to get rookie QB Justin Fields comfortable at home which means Montgomery should be a big part of the Bears’ game plan this week.

Jefferson has been solid so far this year and the Vikings should be throwing the ball a ton on Sunday as they try to keep pace with the Browns’ offense.

Kirk has become one of Kyler Murray’s favorite targets and should get plenty of touches in short routes the Cardinals will likely run to keep the Rams D-line at bay.

Kyler Murray is the MVP Favorite heading into week 4

Quarterbacks sit at the top of the favorites for the MVP award as we head into week 4. Keep an eye on Justin Herbert who has been very impressive so far this season and has the Chargers looking like a real contender in the AFC after their big win on the road at Kansas City. 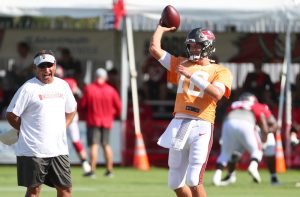 The Bucs are still the favorites after their loss to the Rams and the oddsmakers are probably considering that Tampa is likely to still be on track for the #1 seed and home-field advantage as a result of playing an easier schedule and division than the Rams. The AFC looks wide open this year with a handful of teams that look like they could win the conference.