NFL Week 15 started off Thursday when the Chiefs beat the Chargers 34-28 in overtime. Mahomes threw for over 400 yards and three touchdowns after recovering from his two early turnovers in the game. The four total touchdowns went to fourth-string RB Burton (rushing), WR Hill (who caught 12 for 148 yards), and TE Kelce (who grabbed ten of 191 and two touchdowns). Herbert had a decent game, but couldn’t get the win in the end. The Chiefs deserve the playoff spot over the Chargers, which is karma for moving from San Diego.

The Jaguars will be firing coach Urban Meyer after less than a year of service. But the main story is that Covid is sweeping through a few locker rooms. The Browns, who play Saturday, are without 13 players so far including Mayfield, Keenum, Landry, & Hooper. The Rams have 15 players on the Covid list including OBJ, Ramsey, & Henderson. Lastly, the Washington Football Team currently have 20 players on the list and might have to have their third-string QB play. Other stars like Darren Waller, Hockenson, Kareem Hunt, Hopkins, & Waddle will all miss this week too. 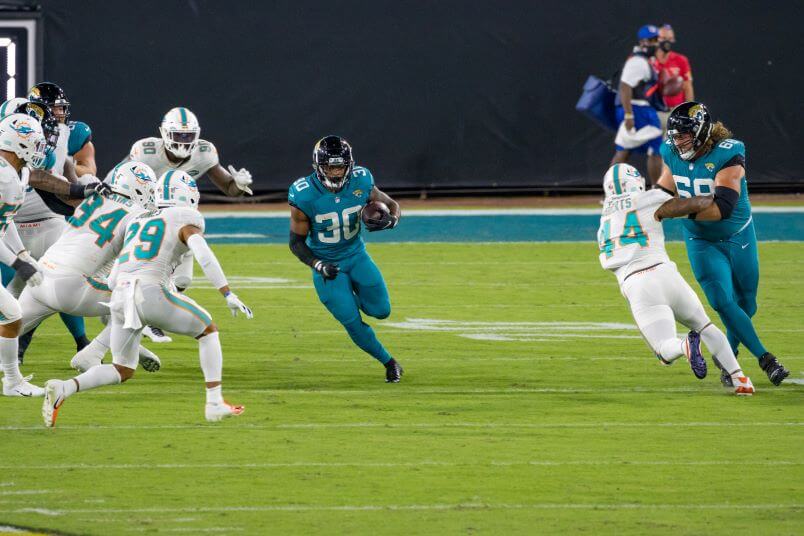 NFL Week 15 saw Urban Meyer get fired. Expect Robinson to pick up as the main RB in Jacksonville.

QB Justin Fields (Bears) plays on Monday against the Vikings who are 29th in the NFL in the last five weeks defending quarterbacks. In the last three games Fields has played fully, he has scored well over 20 fantasy points completing over 17 passes and rushing proficiently.

RB James Robinson (Jaguars) has been named the clear starter at RB after Urban Meyer has been fired. This week the Jags are taking on the Texans who are also 30th in the last five weeks against running backs. Expect the Jags to play better without Meyer.

WR Amon-Ra St. Brown (Lions) has received 12 targets each of the last two games nabbing over 70 yards in both matches and a touchdown in one. This week the Lions will have their two biggest weapons (Hockenson and Swift) out again. Furthermore, the Lions will be playing from behind against a Cardinals team that is 26th defending receivers and 30th in the red zone in the last five weeks.

TE George Kittle (49ers) went off last week against the Bengals, and the week before against the Seahawks. This week the 49ers will be facing the Falcons who have the fifth worst defense in the last few weeks. Kittle is an easy smash play and well worth the price.

Get a full betting preview of the Sunday Night Game between the Saints and the Bucs.

The Titans are nine and four and keep winning despite playing without Derrick Henry. Foreman will lead the barrage of the running back committee against a Steelers defense that is the worst in the NFL in the last five weeks against the run. The Steelers are not very good at defending receivers either, and Julio Jones is another week away from his injury to exploit them through the air. On the other hand the Titans’ defense has been playing with the fifth best run stopping defense and tenth best against tight ends. Big Ben will try to air it out all game, but with Harris unsuccessfully leading the ground charge, the Titans will win by a field goal or more on the road in the freezing cold Heinz Stadium.

Both of these are seven and six and third in their division, fighting for a playoff spot. This is a must win game for both of these squads to make a playoff push. The Bengals defense has been a surprise this year, and they rank 3rd best defending the run in the last five weeks. The run is the only good thing the Broncos can do on offense. The Broncos defense themselves are sharp and are all around good, but the Bengals have too many offensive weapons available for the Broncos to shut down Chase, Mixon, Higgins, and Boyd all at the same time. Take the Bengals by a field goal in Mile High.