NFL Week 14 kicked off with the Pittsburgh Steelers losing to the Minnesota Vikings 36-28. RB Dalvin Cook ran away with the game scoring two touchdowns and rushing for 205 yards. Kirk Cousins struggled, but connected with Jefferson and Osborn for a touchdown a piece.

Big Ben threw for over 250 yards, Harris had over 100 yards and two touchdowns, and four different receivers caught at least four passes each. Ultimately, the Steelers defense could not stop the barrage of offensive weapons from the Vikings. Despite the Vikings’ loss to then-winless Detroit last week, it was easy to pick the Vikings win against the Steelers by keeping up with current betting strategies.

QB Zach Wilson (Jets) threw for 226 yards and two touchdowns last week against the Eagles, and even ran a touchdown in. This week he is up against the Saints, who have a secondary that is performing worse than the Eagles. In order to have money on expensive players like Fournette and Kittle, plug in Wilson, who was QB seven last week.

RB Leonard Fournette (Buccaneers) is cheaper than normal this week because he is up against the Bills. However, in the last five weeks the Bills rank 27th against the run. Since week three, Fournette has scored double digits in fantasy every week, except for once. He is a duel threat in the air and should be taken as a top five steal at running back this week.

WR DJ Moore (Panthers) will face off against an Atlanta team that is 31st in the league against wide receivers in the last five weeks. Furthermore, Moore has benefited with Newton as the QB. The Panthers are coming off of a bye and should use Moore to win comfortably against the Falcons.

TE George Kittle (49ers) went off last week against Seattle who are 32nd in the league defending tight ends in the last five weeks. This week he’ll go against Cincinnati, who are 29th in the league, yet 30th in the red zone. Kittle is cheaper than expected for a top tight end choice. 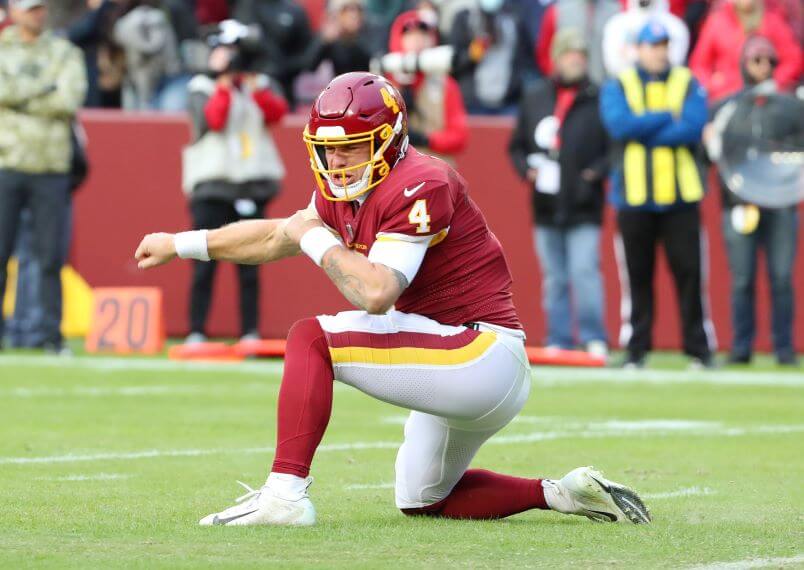 The Washington Football Team’s defense has been a disappointment this year, but in the last few weeks the team has really stepped up their play. They have won their last four games in a row, and during that stretch are a top ten team against RBs and top fifteen against WRs and TEs. On the other hand, Dak has had his three worst games on the road (LAC, KC, & NO last week). While the Football Team is rated as 32nd against QBs so far this year, in their four game winning streak they have moved up to 22nd against QBs and have moved 17 spots higher at defending WRs as well. Washington still has a chance at the division and are currently fighting for a wildcard spot too; this game means everything to them.

These teams have both struggled this year, and somehow both sport a surprisingly average five and seven record (along with the fellow AFC South Saints). The Panthers’ will be without McCaffrey for the rest of the year, but Abdullah and Hubbard are useable replacements on the ground. This late in the season rookies like Hubbard, Marshall, & Tremble all will get extended shots and all three are talented players that can shine with more attention. Don’t forget DJ Moore, the most underrated playmaker in the NFL. The Panthers’ defense has also been in the top half of the league when it comes to defending QBs, RBs, & TEs in the last few games, while Cam has been QB.

The Falcons have already lost to the Panthers on Halloween, and have only won two games since then (Saints and Jaguars). The Falcons have the 30th worst defense both all season and in the last four games. Gage and Patterson might do well again this week, but it won’t be enough to swoop in and take a win.

Betting doesn’t have to stop with football, UFC and MMA have had and continue to schedule great matchups.