What an awesome first week of NFL action this past week that lays the groundwork for an exciting season ahead of us. The season kicked off with the Bucs vs. Cowboys matchup that came down to the wire and the week one slate finished off with an overtime thriller between the Raiders and Ravens. With Thursday night football action back again this week, it is a great time of the year if you are a football fan! 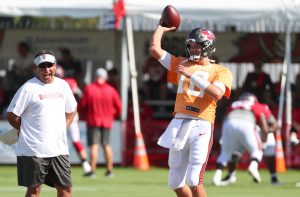 Brady had a big opening night vs. Dallas (source: shutterstock)

The NFL could not have asked for a better opening night as the Cowboys and Bucs played an absolute thriller on Thursday night. Both offensives were very sharp as Tom Brady threw for 379 yards and 4 TDs while Dak Prescott had 403 yards and 3 TDs.

The Cowboys took the lead late after a back and forth game 29-28 but left too much time left on the clock for Tom Brady, who led the Bucs down the field with under 2 minutes left to eventually lead to the game-winning field goal which gave the Bucks the 31-29 win.

Murray helps the Cardinals get off to a great start

The Cardinals went into Tennessee as big underdogs but came out with a big 38-13 upset as Kyler Murray set the tone early with 4 TDs in the air and one on the ground to shock the Titans. The Cardinals defense led by Chandler Jones and JJ Watt did a great job stopping the Titans rushing attack and held Derrick Henry to under 60 yards on the ground. The NFC West is loaded this year with the Seahawks, Rams, 49ers, and Packers all hoping to compete for the Super Bowl.

The Saints played their home game with the Packers on the road in Jacksonville due to Hurricane Ida and put up the most surprising performance in 38-3 week 1 win.

Major questions surrounded the Saints on offense with Drew Brees out of the picture, but Jameis Winston had a huge day with 5 TDs and showed the rest of the NFC that the Saints are still a player without Brees. Aaron Rodgers looked lost for most of the day and was benched in the 4th after having only 133 yards with two interceptions.

Stafford looks at home in LA

Matt Stafford showed why the Rams coveted him so much in the offseason by lighting up the Bears defense for 321 yards and 3 TDs. The Rams look like a real threat to get back to the Super Bowl with their physical defense and Stafford’s ability to stretch the field with his arm strength. 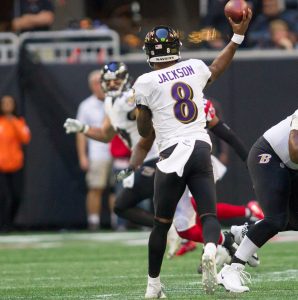 Lamar Jackson is going to have to carry the load for the Ravens (source: shutterstock)

The Ravens suffered some of the worst injury luck in recent memory with running back JK Dobbins tearing his ACL a week before the season started and then lost the backup running back Gus Peters and Pro Bowl cornerback Marcus Peters the next week to season-ending ACL injuries as well. The Ravens looked good for three quarters on Monday Night Football in Las Vegas, but fell apart in the 4th and lost in overtime.

The Super Bowl odds moved around some after Week 1 with the 49ers making the biggest jump up to +1300 after their road win in Detroit. The Seahawks +1800 looked very good on the road in Indianapolis and the Bills dropped a tough game at home vs. the Steelers, who look to be a player once again with Ben Roelisthberger back at QB.

Here are the top Super Bowl odds after week one:

The Eagles looked great with Jalen Hurts in their week 1 win at Atlanta and will face a tough test at home against the physical 49ers who have to travel to the east coast.

The Chiefs came back to beat the Browns after a sloppy first half and will travel out to Baltimore for a big Sunday night game against the Ravens. It will be interesting to see if the Ravens can bounce back at home and keep up with the explosive Chiefs offense as two of the league’s most entertaining players in Patrick Mahomes and Lamar Jackson face off.

The Baltimore Ravens head to the desert to face the Las Vegas ...

NFL football is finally back after a long offseason and it will ...