We have another solid Thursday Night football matchup lined up as the surging 49ers head to Nashville to take on the Titans in a game that should have some big playoff implications. The 49ers have won 6 of 8 and look like the type of team that can make a deep run in the playoffs after getting off to a slow start. The Titans have the opposite problem, where they started off the year strong but have struggled in the last month losing 3 of 4. 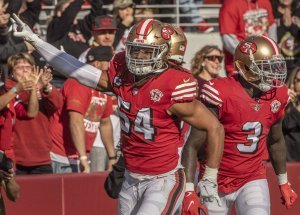 The 49ers are the 3 point road favorites which demonstrates how well the Niners have been playing and what the oddsmakers think about how the Titans are currently playing. In a jam packed AFC, the Titans are nearly in must win territory, with the red hot Colts only one game back in the division and several wild card contenders all at 8-6.

Check out BetMGM or Unibet for the latest odds on the 49ers vs. the Titans

George Kittle has 850 yards and 5 TDs this year and Deebo Samuel is already over 1000 yards with 6 TDs, and I think both of these players will likely find their way in the end zone against the Titans. The 49ers like to use their running game to chip away down the field and then when they get in the red zone Kittle and Samuel are perfect play are big targets for QB Jimmy Garoppolo.

I like both QBs to go over their passing yard totals as I think both teams will be treating this like a playoff game which means the game plans will be more aggressive than normal. Without Derrick Henry, the Titans have struggled running the ball and I suspect they will try to get something going through the air as the Niners D-line is one of the best in football and they will probably struggle to run the ball.

Once again, Kittle and Samuel present the best odds in my opinion to beat their yards totals due to the fact that the Niners should have no trouble moving the ball on the suspect Titans defense. I wouldn’t be shocked to see the 2 top Niners targets get close to 100 yards each when all is said and done.

The 49ers have been flying under the radar over the last 8 weeks as most of the NFL world thought they were lost for dead after their slow start. The 49ers look like one of the most balanced teams in football at this point and I think they make another big statement win against the Titans on the National TV.  Garoppolo’s time in San Francisco looked like it was winding down this offseason after the Niners drafted Trey Lance, but Garoppolo has been playing solid football all year and has a 100.7 passer rating and I like him to have a big night with nearly 300 yards and a few touchdowns that result in a 49ers win.