We have another big Thursday Night matchup this week between two AFC West teams in the Chiefs and Chargers that both look like they will be in the playoffs and serious contenders come playoff time. The Chargers have won 3 of 4 and are only a game back of the Chiefs who have won 6 in a row after a slow start in the AFC.

Head over to our Strategies Page for some tips if you want to get in on the Chiefs vs. Chargers action. 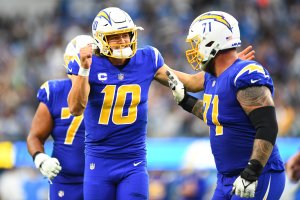 The Chiefs are tied with the Titans and Patriots for the top seed in the AFC and are hoping to win out so they can capture home-field advantage throughout the playoffs. The Chargers are leading the wild card race and a win over the Chiefs would put them in the lead for the AFC West. 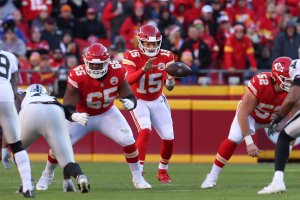 Pat Mahomes has led the Chiefs to four straight wins

The Chiefs struggled on offense early in the season and lost 30-24 against the Chargers at home in Week 3. In the last few weeks the Chiefs offense seems to have found their groove as evidenced by their 48-9 blowout win over the Raiders last week. The Chargers offense has been equally as impressive in recent weeks and has put up over 35 points in 3 of their last four games. Kansas City ranks 26th in passing yards allowed per game and will have the tough task of trying to contain Justin Herbert, who currently has the 4th most passing yards per game.

In a game like this one with so many offensive playmakers, you can throw a dart at any of the top playmakers on either roster and the odds are that they will find a way to get into the endzone.

With this game taking place in the temperature-controlled Sofi Stadium both offenses should be able to push the ball down the field and take advantage of their team speed. It seems like a no-brainer that both teams should combine for over 52 points and I wouldn’t be shocked if we see a combined point total close to 75 or 80.

Check out BetMGM or Unibet for other prop bets on the Chiefs vs. Chargers

The Chiefs are getting all of the national attention heading into this matchup but the Chargers have quietly turned the corner in their last few games and I think Herbert will have a big night on the national stage and throw for over 300 yards. The Chargers don’t get a ton of national attention being the second team in LA and the country will finally get to see how good this Chargers team is on Thursday night.

Both teams have two of the most explosive offenses in the NFL and plenty of star power will be on display on Thursday night. Will Patrick Mahomes continue his hot streak or will Justin Herbert shine on the national stage and send a message to the league that the Chargers are ready to make a run at the Super Bowl this year. Whatever the outcome, if you are a football fan, sit back and enjoy this matchup as we could have both teams scoring into the 40s when this one is said and done.

I think the Chargers pull off the big win at home and make a case for the top spot in the AFC over the last few weeks in the regular season. If the Chargers can get past the Chiefs they have very winnable games against Houston, Denver, and Las Vegas. A 12-5 record may be enough for the top seed in the AFC this year and while most of the national attention is on the Patriots, this could be the year the Chargers finally break through and reach the Super Bowl.