Last week the 49ers beat out the Cowboys, in one of the wild west finishes a playoff game could take. The Cowboys were trying to drive to score a touchdown and win the game, but ultimately ran out of time as they tried a quarterback rush up the middle for 17 yards with no timeouts. They couldn’t get the ball set by the ref and snapped in time, and the game expired with the score of 23-17. The Packers on the other hand, had a first round bye with the best record in the NFL at 13-4. San Francisco at Green Bay will be cold, it should be about 15 degrees (-9.5 Celsius) on Saturday.

These two teams played each other in Week Three, when the Packers beat out the Niners in San Francisco 30-28. The Packers won with a last minute 51 yard field goal. Aaron Rodgers had a very Aaron Rodgers day throwing for 261 yards and two touchdowns (Davante Adames & Valdes-Scantling). Aaron Jones rushed for 82 yards and a touchdown himself. Kicker, Mason Crosby had the best game of his season with three field goals (two over fifty yards) and three for three on extra points. The Packers defense had four sacks and two turnovers, which ultimately was the difference maker.

The 49ers could of won the game, and probably should have won the game since it was decided on a last minute fifty yard field goal. Jimmy G threw for 257 yards and two touchdowns (Juszczyk & Aiyuk) as well as an interception and fumble. Trey Lance came into the game to score a rushing touchdown as well in his NFL debut. Kittle caught seven passes for just short of a hundred yards. Star running back, Elijah Mitchell was out this game, and this was one of two opportunities for other rookie Trey Sermon, who was buried on the depth charts after Week Four. 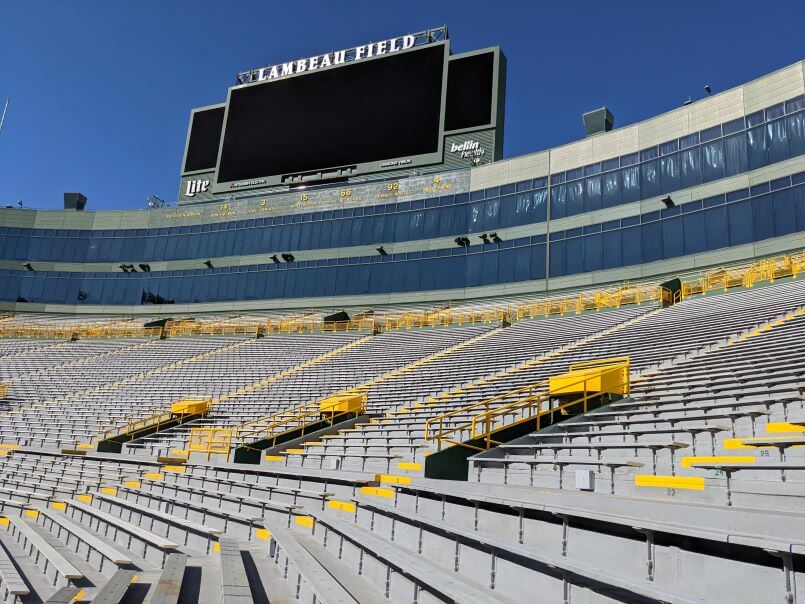 San Francisco at Green Bay will be below freezing at about 15 degrees.

Green Bay plays significantly better at home.  So far they are 8-0 at home and naturally score more points and give up less points in Lambeau. At the end of the season the Packers’ defense has played pretty poorly (their stats actually improved with the loss to the Lions to end the season). Green Bay is average at defending running backs, but have been giving up big numbers to quarterbacks and wide receivers. This is the game where they will fall short.

That game should have gone to the 49ers who held the lead until the final seconds on a desperation fifty-one yard field goal. That was earlier in the season when the Niners were missing their run game. Elijah Mitchell rushed for 96 yards against the Cowboys last week (who rank as the third best rushing defense in the latter half of the year). Week Three was before San Francisco was using Deebo like a super-weapon. Against the Cowboys, Deebo rushed for 72 yards and caught three passes for 38 yards. That is 168 yards on the road, against a team they should have lost to that has the fourth best rushing defense in the entire year.

The Packers have a much more pedestrian defense, and have struggled in the later half of the season to the Rams, Bears, Ravens, Browns, Vikings, & Lions. The Packers 13-4 record doesn’t show how lucky they got this year barely beating the terrible Bears, disappointing Browns, & the Ravens who went for two points to win and lost.

Since coming back from injury Mitchell has 119, 85, & 96 yards with two touchdowns in three games. He is a big reason for the 49ers success this year, & expect plenty of rushes during this cold game.

Green Bay is 22nd in the league at defending tight ends, Kittle has scored six touchdowns since the halfway mark of the season.

The Los Angeles Rams host the San Francisco 49ers in the NFC ...

Blowouts defined the first week of the NFL Playoffs, but the Divisional ...

Week 14 of the NFL season didn’t look like much early in ...