We head into week 6 of the College Football season with teams starting to separate from the pack and the college football playoff picture starting to narrow down to around 5-8 teams that actually have a shot to make the CFP.

The Pac 12 had a rough week with undefeated Oregon falling at Stanford and UCLA lost at home to Arizona State, while Alabama and Georgia looked impressive in the SEC and both look teams look like they have a great shot to make the playoffs. All odds are provided by DraftKings SportsBook.

Let’s take a look back at the week 5 highlights, Heisman Odds, and top matchups for week 6 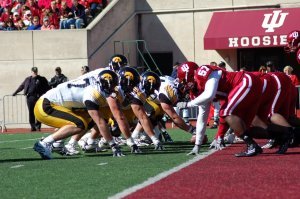 Iowa could be on the cusp of a historic season

One of the surprise teams this year has been the Iowa Hawkeyes and they have gotten better each week and dominated Maryland on the road 51-14. The Hawkeyes are 5-0 and are now ranked 3rd in the country. For years Iowa has been a respectable program in the Big 10 but never thought of as a top 5 type team, but this could be the year they break through and win the conference.

Oregon fell to Stanford on the road in overtime 31-24 and their College Football Playoff hopes took a big blow as a result. Oregon moves to 4-1 and is still the frontrunner in the Pac12, but will likely need some upsets in the SEC and Big 10 to get back into consideration if they can run the table throughout the rest of the year.

Cincinnati was able to make a big statement with their 24-13 win over Notre Dame in South Bend. Cincinnati has an easy schedule the rest of the way and should finish the season undefeated. The big risk for the Bearcats playoff chances is the SEC and Big 10 both having teams that finish the regular seasons undefeated and end up with a more impressive resume down the stretch.

Bryce Young has taken the lead in the Heisman race as we head into week 6 after his solid performance against Ole Miss last weekend. Desmond Ridder was impressive for Cincinnati over Notre Dame and should put up very big numbers down the stretch.

Be sure to check out the Betting.net best bookmakers page for the most up to date sports betting promo codes

The CFP odds look a little different this week with Cincinnati and Ohio State making a big jump. Alabama and Georgia look like they are playing at another level than the rest of college football right now and we could have an Alabama Georgia SEC Championship and then a rematch with both teams facing each other again in the CFP championship. The rest of college football and the CFP committee would rather have any other matchup but they may be left with no choice if both teams continue to dominate and we have a competitive SEC Championship Game.

One of the best matchups this weekend has major CFP implications as the Nittany Lions travel to Iowa in a big 3 vs. 4 matchups. Penn State needs this game a little more than Iowa as the Nittany Lions are in the same division within the Big 10 as Michigan, Ohio State, and Maryland, who are also undefeated in the Big 10. This seems like one of those magical seasons for Iowa and I like them to get the win in front of a packed stadium at home.

The Red River rivalry should be a good one this year as Oklahoma has shown some holes this season and Texas looks to be clicking on offense coming into the game. Oklahoma is favored by 3 and has to win this game in order to stay in contention in the CFP race. This game smells like a trap game for Oklahoma and I like Texas to pull up the upset in Dallas in this one.

Another game that looks like could produce a big upset is Nebraska vs. Michigan in Lincoln. Nebraska looks to finally have turned the corner under Scott Frost and will be geared up to get the big upset at home over a surging Michigan team. I like Nebraska QB Adrian Martinez to be the difference in this matchup and I think Nebraska will get the win at home.