College football heads into week 3 this weekend with a nice balance of competitive conference matchups as well as some out-of-conference games that will be exciting to watch. The top matchups both involve SEC schools with Alabama traveling to Florida and Auburn heading to Penn State. 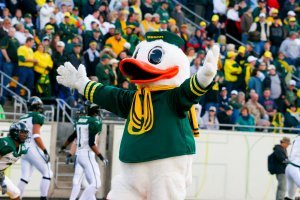 Oregon had a huge win over Ohio State in week 2. (source: Shutterstock)

We had a couple of big road upsets that were the main stories from week 2 with Oregon going on the road as 14 point underdogs and upsetting Ohio State, and Iowa took down Iowa State (27-17) on the road in Ames.

Oregon looks like they may be head and shoulders above the rest of the Pac12 and they have a good chance to run the table and get into the College Football Playoffs. They do have one game on the road at UCLA in week 7 that should get plenty of national attention playing against their former coach Chip Kelly.

Key Matchups and odds in Week 3

Here is a look at some of the top matchups in week 3 and odds heading into the games:

Oklahoma is a big favorite at home vs. Nebraska as two old-school Big 8 rivals face off for the first time since 2010. Both programs have gone in opposite directions in the last 20 years with Oklahoma evolving into one of the best passing teams in college football while Nebraska has struggled to find an identity since the late 1990s when they ran the option.

Oklahoma has looked shaky on defense so far this season and the Huskers have looked much better the last couple of weeks since their disappointing week 1 loss at Illinois. There is a ton of heat on Scott Frost to show signs of life this season and I like Nebraska’s chances to hang around in this game similar to the way Tulane did on the road at Oklahoma in week 1.

Michigan State has put up plenty of points on offense in the first two weeks of the season which is a big change from what Spartan fans are used to seeing under former coach Mark Dantonio.

Miami looked bad in their week one game vs. Alabama and I think the +5 Michigan State is getting is too big of a number. I like Michigan State to go on the road and pull the upset in Miami, where they should have plenty of Spartan fans in attendance. 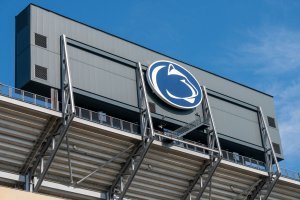 Penn State looks for a big win at home vs. Auburn (source: shutterstock)

Auburn heads on the road to State College where College Gameday will be in attendance for this big SEC/Big10 matchup. Penn State had  big week 1 win on the road at Wisconsin and Beaver stadium should be rocking as over 100,000 Nittany Lion fans have been waiting two years for a big game at home.

James Franklin is one of the best coaches in the country and has some SEC familiarity from his time coaching Vanderbilt and will be looking to send a message that they are for real. With Ohio State looking shaky this could be the year Penn State finally breaks through and wins the Big 10.

Not a ton of movement on the Heisman front as Bryce Young still leads the way at +350 for Alabama, followed by Matt Corral from Ole Miss (+500) and Spencer Rattler from Oklahoma (+800).

A player to keep an eye on in is RB CJ Verdell from Oregon (+2500), who could become the front runner later in the season if the SEC schools beat up on each other and the Ducks end the season undefeated. With Alabama and Oklahoma players winning over a handful of Heisman’s in the last decade the voters could look to give it to someone like Verdell, who should put up big numbers on the soft Pac 12 defenses.

We are already almost a third of the way through the College ...