The Big 10 Tournament tips off Wednesday, March 9th. Anything can happen in March, especially how the Big 10 played out this year.  The Big 10 crowned two regular season champions (Wisconsin and Illinois). This was improbable because Wisconsin only had to beat #140th ranked Nebraska, or have Illinois lose to a good Hawkeyes team. Wisconsin lost a heartbreaker to the Cornhuskers. Furthermore, Illinois beat Iowa 74-72, while Cockburn scored 21 points and 14 rebounds. His double-double lead to a shared Big 10 title. Use the conference tournaments to hone your Betting Strategies for Basketball, before March Madness officially tips off March 15th.

Whoever wins the Big 10 Tournament outright will automatically get into March Madness. The first round of the Big 10 tournament will be on March 9th in Indianapolis. The championship game will take place before the official Selection Sunday announcement on March, 13th. During that time thirteen games will be played to decided who the conference champion will be.

Minnesota is 14 of 14 in the Big 10 standings, and will have to play 11th ranked Penn State in the first round. If the Golden Gophers were to beat Penn State for a second time this year, they would be matched up against Iowa then play Rutgers, and then probably Illinois and win the champion game (likely Purdue or Wisconsin).

Nebraska fell to 13th of 14th in the standings and will get #12 Northwestern in the first round. The 10-21 Cornhuskers would then play Ohio State, followed by Purdue then probably Wisconsin and finally the championship.

#11/14 Penn State should get the victory over Minnesota, but will have to play Iowa, then Rutgers, probably Illinois, and then for the championship against Wisconsin, Purdue, Ohio State, or Michigan State.

Northwestern is 12th in the standings and will have to face a surging Nebraska team first. It’ll be a hard road against Ohio State, Purdue, probably Wisconsin and Illinois to get the victory.

The Terrapins are 10th in the standings and will have to play #7 Michigan State to start. If they win they will have Wisconsin, then probably Purdue, and then probably Illinois. Maryland isn’t above .500 this year.

Indiana is cold losing seven of the last nine games during the regular season. The Hoosiers are ninth and will play  hot-#8 Michigan. If they win they will have Illinois, probably either Rutgers/Iowa, then probably Wisconsin/Purdue. If they don’t beat Michigan, they will probably miss March Madness altogether.

#7 Michigan State has lost seven of ten games to end the season, and will have a tough uphill battle after #10 Maryland. The Spartans will have Wisconsin, then Purdue/Ohio State, then probably Illinois. If they don’t beat Maryland they probably will miss March Madness altogether.

The #6 Buckeyes are a dangerous team with a 19-10 record. They will play the winner of the Northwestern/Nebraska game, then will face Purdue, and probably Wisconsin and Illinois. It won’t be easy winning four straight, but they could.

The Scarlet Knights are ranked fourth, yet have the sixth best odds to win the tournament. They have been streaky, but hot lately. They just need to win against probably Iowa, Illinois, and Wisconsin, in which they have beaten all three so far this year.

These are bad odds for #8 Michigan, they will play a desperate Indiana team, then against top-team Illinois, then two more games against top teams to win it all. Trend away from the Wolverines.

The #2 Badgers have the fourth best odds because lead scorer Johnny Davis has a sprained ankle with unknown severity. The Badgers will make March Madness, so they may rest him during the Big 10 Tournament. They will have to face the Michigan State/Maryland winner then likely Purdue and the championship game.

The Hawkeyes are good, but they are fifth in the standings and will have to win four games to win the tournament. They will get the winner of the Penn State Minnesota game, followed by Rutgers, probably Illinois, and then the championship game. 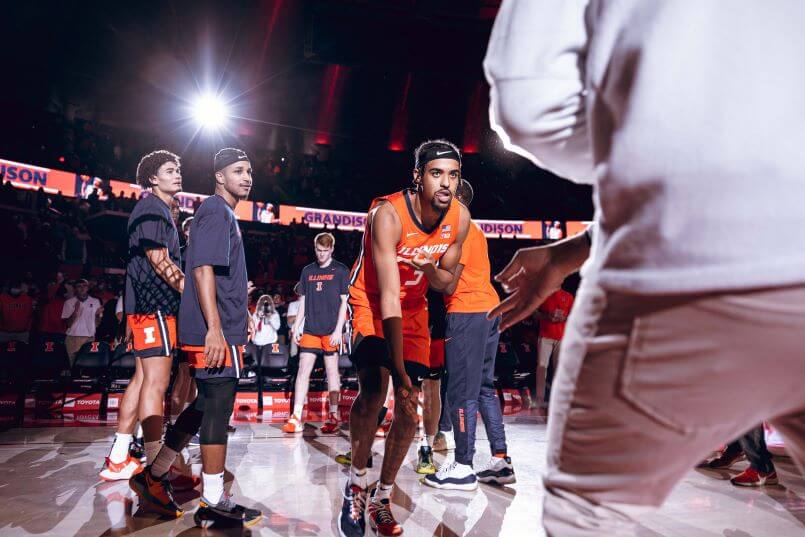 Illinois has one of the easiest paths to win the Big 10 Tournament. Consider them at +350.

Illinois earned their shared Big 10 regular season championship, and they have the easiest path to get there. They will get the winner of the Michigan/Indiana game, followed by Rutgers/Iowa, and then the championship game.

Purdue is good, but they ended the season 4-3, with only one quality win over Rutgers. They will probably get Ohio State out of the gate, who they only played once this year (and barely won at home). Purdue will probably get Wisconsin and then the championship game. They could do it, but it’s a harder path than Illinois.

Whether it’s basketball, hockey, or NFL Draft we found the best sports betting sites to help you win more, and while using house money.

March Madness has officially begun as Selection Sunday bestowed the brackets that ...