The season started off hot, with four number one teams in four weeks. The season still has plenty of great matchups planned, but let’s see if those games will be played. Some days more games are cancelled than played and while some teams have played 13 games, others have only played nine. Before the New Year’s Preview, catch up on all the best betting strategies for college basketball.

Currently there are four undefeated teams this year (#1 Baylor, #7 USC, #8 Iowa State, & #20 Colorado State). This year it feels like there have been better non-conference matchups than years prior and it has left the top teams shook up. Currently the top five teams that have the best odds to win the NCAA Tournament are

The season is still young, and anything can happen, especially with more and more games being cancelled or postponed because of COVID concerns. When games are played though, we’ve seen why this could be one of the best brackets in basketball in the past ten years. You can place early bets on who you think will win the Wooden Award for best player. The top candidates are 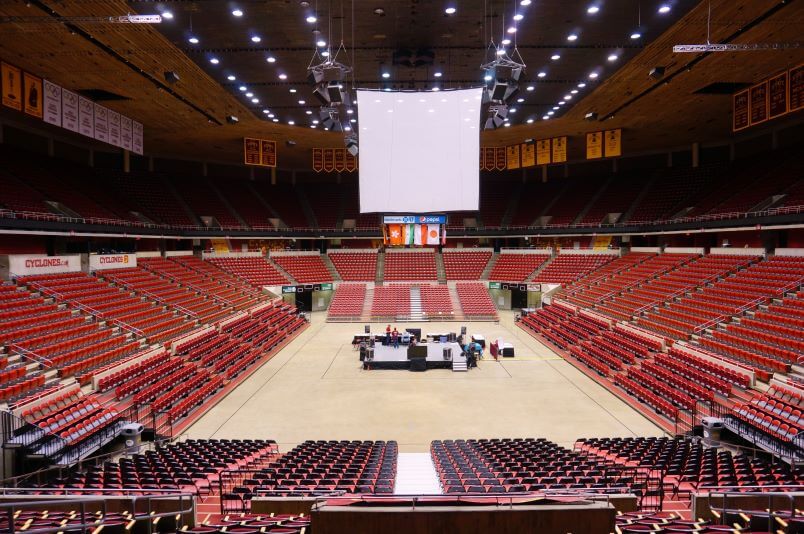 Undefeated Iowa State will take on #1 undefeated Baylor and #25 Texas Tech this week.

These two teams are undefeated, which makes this matchup a can’t miss New Year’s watch. Baylor has played a pretty tough strength of schedule so far beating now-ranked #22 Villanova and #10 Michigan State, and other solid teams like Arizona State, Oregon, & VCU. Iowa State has beat #23 Xavier, and good teams in Creighton, Iowa, & Memphis (who was ranked #9 at the time). This matchup will be played in Iowa State’s home court, which will make this game wild. Iowa State will get the upset and skyrocket up the polls to become a top five team.

LSU just lost their first game of the year to #11 Auburn. Meanwhile, Kentucky lost to Duke and Notre Dame, but hasn’t played any notable matchups so far this year. LSU’s Tari Eason has been on fire and shooting 15.8 ppg, which is the same as Kentucky’s top NBA prospect Oscar Tshiebwe. Expect the Tigers to keep up their excellent defense and get the win against a tough SEC opponent.

Don’t forget this is the same Wisconsin team that upset #12 Houston, while also earning impressive wins against Indiana, St. Mary’s, & Marquette. However, they do struggle with top-tier teams like now-ranked #13 Ohio State and #21 Providence (the only two teams they lost to). Even their big win against Houston was a nail-biter at 65-63. Purdue, has only lost to a 6-5 Rutgers’ squad, and almost stumbled and lost against NC State in overtime. This is their first real test since that embarrassing loss that cost them their number one ranking. Take Purdue on the spread and the money line and watch them reclaim dominance against Davis and the rest of the impressive Badgers.

Villanova may have played the hardest schedule out of any team so far this year. They are 8-4 with all four of their losses against ranked opponents, while beating two ranked teams themselves (#14 Tennessee and #20 Xavier). Seton Hall beat #17 Texas, and their two losses were to #13 Ohio State and #21 Providence. The Pirates missed three games because of COVID protocols, but came back looking strong against Providence, only losing 70-65. Seton Hall has better numbers on all major categories per game except assists. Choose the Pirates on both points and spread to win at home against a tough-scheduled Wildcats team.

West Virginia is 11-1, and could cause problems for 10-2 Texas. The Mountaineers have not played many good teams, but did beat UCONN earlier this year. However, take the Longhorns and their outstanding defense to even the records of these two schools.

The college football season ran relatively smooth, however with COVID cases on ...