The main story around the NBA over the past week has been centered around teams placing players in Covid protocols and game postponements. The Nets are in such desperate shape that they brought back Kyrie Irving to play in road games despite their stance earlier in the season that he would not be rejoining the team until he was vaccinated. Many games have moved around in the past week as teams scramble to find enough players to fill out the active roster.

That being said, we still have some big-time matchups scheduled for this week highlighted by the Christmas day matchups between some of the best teams in the league. With football season winding down, lukewarm basketball fans start to pay attention to what is going on in the NBA around Christmas time and they will likely be impressed with the competitive balance that we have seen this year. If you more in depth tips on how to play the NBA odds head over to our strategies page.

The Nets still hold on to a firm grasp on the top odds to bring home the NBA title as they got a boost this week when it was announced that Kyrie Irving will now become eligible to play in games in cities that don’t have Covid mandates. This means that Kyrie will play in about 50% of games down the stretch and if the Nets can stay healthy they will be very dangerous come playoff time. 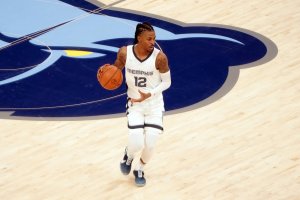 The Warriors look like they have turned back the clock five years with a revitalized Steph Curry and Draymond Green and young players like Gary Payton II, Andrew Wiggins, and Jordan Poole all bringing new youth and energy to the Warriors roster. The Grizzlies have been one of the surprises in the West and are sitting in the 4th spot in a conference loaded with contenders. Ja Morant is evolving into a superstar and is averaging 23.7 points per game and all five Grizzlies starters are averaging double figures. The Grizzlies play in small market Memphis so they have been flying under the radar and winning a game on the road vs. the Warriors is a great way to get attention in Memphis.

Check out BetMGM or Unibet for the latest odds on the Grizzlies vs. the Warriors 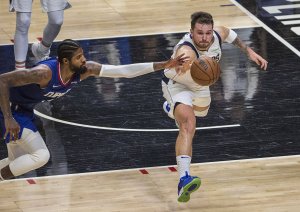 Doncic is facing some pressure from management to drop some weight

The Bucks dropped two in a row in the last few days to the Pelicans and Cavs and have fallen down to fourth in the Eastern Conference. Despite their recent slide, the Bucks have shown flashed this season when they want to turn up the pressure and look like the defending champions that we saw dominate down the stretch last year. The Mavericks have also been battling with inconsistency and much noise has been made surrounding the physical shape of Luka Doncic early this season. Kristaps Porzingis has been a bright spot so far this season for the Mavericks as he finally looks healthy and he is averaging 19 PPG and 8 rebounds. If Doncic can get in shape and play like he did last year down the stretch the Mavs should be able to get into the playoffs and would become a dangerous team if they squeeze in.

The Lakers have lost two in a row after putting together an impressive three-game win streak last week and you have to wonder if this is how things will go for them all season. With an aging roster with plenty of egos, there will be off nights and then other nights where they look like one of the top teams in the league. At this point, it seems like the Lakers ceiling would be to get into the playoffs from anywhere from a 4-8 seed and then hopefully be healthy and try to make a run when they get there. The Spurs are off to a bad start at 12-18 and you have to start wondering if this will be it for future Hall of Fame coach Greg Popovich.