One of the big stories in the NBA over the past couple of days has been the Chicago Bulls covid outbreak which has left 10 players having to enter Covid protocols.  The Bulls’ game on Tuesday night and on Thursday night is postponed as a result which is a tough blow for a Bulls squad that is second in the East and was starting to hit their stride.

In looking ahead to this week’s games we have great games every night as we lead up to the big Christmas Day games, which typically is when casual fans start paying attention to what is going on in the NBA. The Suns and Warriors look like they will be at the top of the West all year.

The Nets are still the favorites to win the title which is a bit of a surprise considering all of the talent in the West. The oddsmakers are likely watching the way Kevin Durant is playing as of late and factoring in how big of an impact he can have in a playoff series. The Warriors, Bucks, and Suns are all right behind the Nets with the next best odds and out of these four teams the ultimate NBA champion could come down to which of these teams can stay the healthiest as they all have the talent to win it all.

The Knicks and Warriors face off Wednesday night in what should be a historic game where Steph Curry breaks all time three-point shooting record. Curry enters the game needing only two three-pointers to break Ray Allen’s record and what better way to break the record than on the big stage in Madison Square Garden. The Warriors dropped a tough game on the road to the 76ers last week but are still tied for first in the West with the Suns. The Knicks have dropped three in a row in a crowded eastern conference and are hoping a big win over the Warriors can help turn their momentum around. 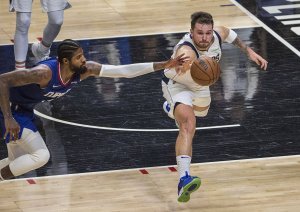 Doncic is hoping to be cleared to play for the Lakers game on Wednesday.

The Lakers have won two in a row and will look to make it three in Dallas on Wednesday night against the Mavericks. Lebron James finally looks healthy and put up a triple-double on Sunday night in a win over the Magic. The Mavericks have fallen to the 7th spot in the Western conference as questions have started to pop up regarding Luka Doncic’s conditioning as he has struggled down the stretch in recent games. Doncic is questionable for the Lakers game as he recovers from an ankle injury and it looks like it will be a game-time decision if he is a go or not. Head over to our Bookmakers Page if you want to get in on the Lakers vs. Mavs action on Wednesday night.

Two of the top teams in the East face off Wednesday night as the Sixers host the Heat. The Sixers pulled off a big win at home over the Warriors, but then turned around and lost to the Grizzlies on Monday night. The Heat have also struggled with inconsistency as both teams will hope to improve their standings in the Eastern Conference. The Heat are currently 3.5 games out of first place and the Sixers are only 4.5 games behind the Nets, so a several-game win streak by either team could elevate them toward the top of the East in a hurry.

The Wizard heads out to Phoenix to take on one of the League’s best teams in the Suns Thursday night in what will be an interesting clash of styles. The Wizards play a physical style of basketball led by Bradley Beal, Montrezl Harrell, and Kyle Kuzma while the Suns like to push the pace. Beal is averaging 22.4 for the Wizards and has them right in the thick of things in the East at only 4.5 games back.