Bet365 Review
Nothing Found
About betting.net
Betting.net / NBA Weekend Preview, Nets vs. Warriors, Odds, What to Watch For

Only a few more weeks to go until the all-star game in Clevland on Feb 20th and we should see a very competitive second half of the season after a crazy first half of the year. Covid wreaked havoc for most of the early part of the season with key players out on a nightly basis but things seem to be calming down on that front.

With full rosters and the moves that teams will make at the trade deadline, the East and Western conferences look like they are totally up for grabs. We could be looking at a potential NBA finals preview on Saturday night when the Nets and Warriors face off in Golden State on national TV.

The Warriors are 23-4 at home and have eliminated all concerns about how well they would play when they transitioned out of Oracle Arena in Oakland a couple of years ago to the Chase Center in San Francisco. The Warriors are favored by 6.5 and I think they cover the spread and get the big home win with Kevin Durant out.  James Harden will be back in the lineup for the Warriors along with Kyrie Irving who is eligible to play since it will be a road game. Without Durant in the lineup, the Nets have struggled defensively and I think there is a good chance the Warriors end up winning by more than 10 in this matchup Kyrie Irving has played well against the Warriors over the years

The Nets look like they will be without Kevin Durant until after the all-star break after he suffered a knee injury a couple of weeks ago. The Nets have fallen a couple of games back of the Heat in the East and are now in 5th place in a crowded conference. It seems like as long as the Nets can stay within 2-5 games of the top seed they have the type of team that can turn it on and rattle of 5-10 games in a row without issue.

The Warriors have also run into some issues over the last month after a great start and are 3.5 games back of the Suns in the West.  Draymond Green looks like he will be out for another two weeks as he tries to recover from calf soreness as his absence has had a noticeable effect on the Warriors on the defensive end. The Warriors are 6-4 in their last 10 and do not play with the same type of edge when Green is out.

Klay Thompson Back in the Lineup 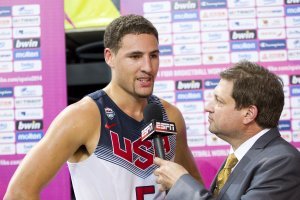 Klay Thompson is getting more minutes each night out and put up 23 points in 27 minutes against the Timberwolves earlier in the Week. Like the Nets, the Warriors have a veteran squad and know they can turn up the intensity if they need to. The team that is the biggest threat to the Warriors is the Suns, who are playing extremely well and the Warriors will be battling for the top seed in the West all year. Whoever ends up getting home-field advantage heading into the playoffs will have a big edge in the playoffs.

MVP Odds for Nets and Warriors

Kevin Durant was the favorite to win the MVP last month but his odds have taken a hit after suffering a knee injury last month. Steph Curry, Giannis Antetokounmpo, and Joel Embiid are the top 3 favorites to win the MVP and all three players have been playing at a very high level over the last month. It looks like the winner of the MVP may come down to which player can stay healthy throughout the rest of the season and my money is on younger players like Joel Embiid or Ja Morant, who are hungry to bring home their first MVP award and have the best chances to stay healthy due to their youth.

The story in the NBA continues to surround the absence of players ...