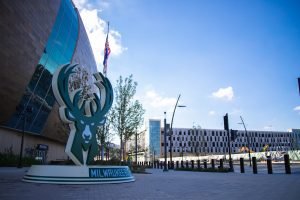 When the abbreviated NBA season started back on December 22nd, a number of storylines had already been written. Would the Lakers repeat for their second championship in a row? Would the super-team in Brooklyn of Durant, Harden, and Kyrie face any competition on their way to an inevitable finals? Could teams like the 76ers or Clippers finally put it all together this year with new coaches and pieces they added in the offseason?

Very few of those storylines, if any, involved the eventual matchup we will see tonight. Chris Paul alongside Devin Booker and a young core of Suns tore through the Western Conference on their road to the Finals. The Milwaukee Bucks, a defensive juggernaut with a literal juggernaut in Giannis Antetokounmpo, shut down the offensive powerhouse Brooklyn Nets in 6 games. Neither team has a single previous NBA champion on their roster, but by July 22nd all of that will change, and a new group of players will cement their legacies on the NBA landscape.

Entering the playoffs as the #2 Seed in the West, but drawing the #7 Los Angeles Lakers, few expected the Suns to even get out of the first round. Once Chris Paul went down with a shoulder injury in Game 1, many saw a similar sight. Fans of the 36 year old point guard know the long history of deep playoff runs only to be derailed by calamitous injury. But to everyone’s surprise Paul not only returned, but dominated on the way to beating the Lakers in 6 games, then sweeping the Denver Nuggets in the 2nd round. Throughout the NBA playoffs he’s thus far averaged 18.1 points 8.7 assists and 1.4 steals per game.

This isn’t to say that the man nicknamed the ‘Point God’ has done it all on his own. The biggest postseason surprise might not be that Deandre Ayton is pretty good (16.2 ppg, 11.8 rpg, 0.9 bpg), but that Devin Booker is elite and may already be one of the best players in the league. In the 24 year old’s first ever postseason appearance, he’s leading the Sun’s in scoring, averaging 27 points per game and over 6 assists. Clearly thriving under the leadership of Paul and Coach Monty Williams, the young shooting guard doesn’t shy away from the big moments and I don’t see him being affected by the pressure of an NBA Finals appearance.

While a run in the playoffs is new for the Suns, the Bucks are looking to exorcise years long demons. Milwaukee has been in the playoffs going back every year to 2017, but even when favorites to win and often with the best player on the court, they have still found ways to lose. This postseason could have seen a similar narrative when crown jewel and two-time MVP Giannis Antetokounmpo (playoff averages 28.2 ppg, 12.7 rpg, 5.2 apg) was injured in game 4 of the Eastern Conference Finals and the Atlanta Hawks tied the series 2-2. However, the team rallied and Khris Middleton stepped up with 23.4 ppg in the playoffs allowing the Bucks to win two straight without the Greek Freak and punch their ticket to the biggest stage in professional basketball. These teams only met twice in the regular season, but both showcased how competitive the matchup can be with the Bucks eking out one point victories both times.

The Bucks and Suns each have their strategies going into the series, now get yours with our Basketball Betting Guide.

There’s no word yet on whether Giannis will be able to play in Game 1 tonight, but if he’s able to make a return even early in the series this will be a memorable NBA Finals for more than just each team’s respective fanbases.