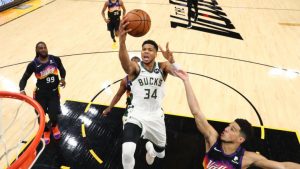 After getting off to a hot start and 2-0 lead in the series, the Phoenix Suns have now lost three straight and will have their backs against the wall for Game 6 of the NBA Finals. The Milwaukee Bucks will look to finish strong at home and capture their first title since 1971. Below we’ll look back at Game 5 to see how the Bucks got into the driver’s seat for this series. Then we’ll look forward to Tuesday night’s Game 6 and break down what could be the last NBA game of the 2021 season.

Late Heroics Save the Day in Game 5

Going into Game 5 each team had won their two matches when playing on their home court. This looked to be the same narrative when the Phoenix Suns got out to a 16 point lead at the end of the first quarter. The Bucks then exploded for 43 points in the 2nd which allowed them to take a lead going into the half and ultimately hold onto it for the remainder of the contest. They were led by Giannis Antetokounmpo who finished with 32 points, nine rebounds, and six assists. Other teammates played a huge role with Khris Middleton’s 29 points, and Jrue Holiday’s 27 points and 13 assists.

Holiday’s biggest impact came on defense late in the game. Devin Booker had the ball with 16 seconds left in the fourth quarter and the Suns were down by a single point. After driving into the paint Holiday was able to rip the ball out of Booker’s hands then run down the court and find Giannis for an alley-oop that he scored on even while being fouled by Chris Paul.

Phoenix did their best to stay in the contest. Devin Booker led the team with 40 points, Chris Paul contributed 11 assists along with his 21 points, and Deandre Ayton had 10 rebounds as well as 20 points. Still, it wasn’t enough to catch the lead that the Bucks held for most of the game. 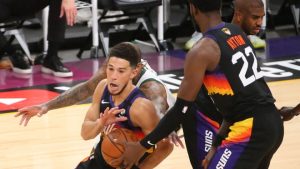 Bucks Will Look to Stay Hot to Win it at Home

After three quarters the Bucks were shooting 62.1% from the floor. That wasn’t just great, it was threatening the all time mark of 62.5% set by Orlando back in 2009. We know Giannis can get to the rim for high percentage shots. The bigger concern was always if other players could step up and contribute. If Middleton and Holiday can score at will like they did in Game 5, we likely will see Milwaukee holding the Larry O’Brien trophy Tuesday night.

This was a tough finish and a tough loss for the Suns who will now have to win in Milwaukee to keep their championship hopes alive. If they can take anything out of this game though, it’s that they have played better basketball than their last two games. Phoenix has consistently been out rebounded by Milwaukee, but were able to close the gap and only lose that battle 37-35 in Game 5. They shot 68.4% from three, 90.9% from the free throw, and had more blocks, steals, and points in the paint than the Bucks. If they can play another game like this, but do a better job on defense and finish in the fourth quarter, they will live to see a Game 7 in Phoenix.

The brightest stars in baseball will shine this Tuesday, July 13th when ...

NBA Finals What We Learned from Game 1

When the abbreviated NBA season started back on December 22nd, a number ...

Get Your Bonus Now!
Latest News
Team USA Olympic Recap 7/29-8/1
We are a little more than halfway through ...
Top 10 Most Expensive MLS Transfers
The MLS has been around since 1996 and ...
Bad Decisions Made By Referees Which Caused People to Lose Their Bet
We’ve all been there. It’s a pivotal moment ...
August 2nd Bi-Weekly Baseball Breakdown
If you have not been following baseball for ...
2021 NBA Draft Recap: Shockers, Implications, Steals
The NBA ushered in a new rookie class ...
Top Betting Sites
Top Betting Bonuses

Enjoy the freedom to bet anywhere with our app reviews and coverage of on-the-go options.

Users must be 18+. If you are having trouble with gambling then help and advice can be found at begambleaware.org.