The 3-7 Seattle Seahawks head to Washington in what oddsmakers are thinking will be a competitive Week 12 Monday Night football game vs. the 4-6 Football Team. Find out all of the info you need to successfully bet the spread, moneyline, points, and props like anytime touchdown scorer. For even more advice betting college or NFL football be sure to check out our Football Betting Strategies. 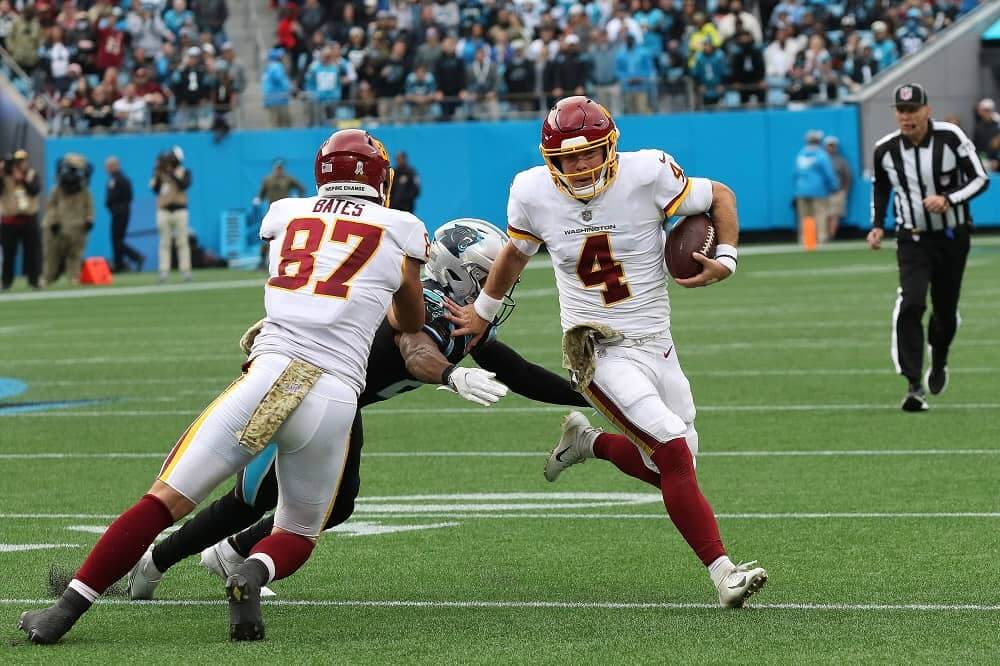 Taylor Heinicke and the Washington Football Team have been great over the past two weeks. Can they keep it up against the Seahawks?

The line currently sits with the Seahawks favored by only a point so this game is essentially a pick’em. I am taking Seattle to win this one against the spread, straight up, and possibly teasing them to win by 3.5 for +145 odds. Here’s why.

Washington’s defense is ranked dead last in 3rd down conversion rate. The Football Team’s defense is without Chase Young and Montez Sweat so I see the Seahawks being able to move the ball well throughout this game. The Football team’s defense was hyped up quite high coming into the season, but hasn’t lived up to it thus far. They are giving up 26.7 points per game, and only scoring 21.2. Their defense was ok on the ground prior to the aforementioned injuries, but have been one of the worst defenses this season through the air.

If the Seahawks coaching staff allows it, and Wilson is capable of throwing it, D.K. Metcalf, Tyler Lockett, and other Seahawk pass catchers should have a big day.

I’m not sure where many of the online bookmakers are getting this line from. Yes, the Seahawks can put up points, but they really haven’t this season and are averaging 20.4 points per game with Wilson under center. The Football Team and Heinicke have been hot lately, winning two in a row while scoring 29 and 27 points. Still, their offense is wildly inconsistent and in the three games before that they combined for 33 points. The biggest thing I’m looking at here is this trend. Seattle has only hit the over in a single game this year. Due to that I will be sticking with that trend, taking the under, and overall feeling pretty good about it.

If you’ve ever watched the Seahawks play over the last five years you know they love to run the football, sometimes even to their own detriment. Therefore I’m taking Alex Collins for an anytime touchdown scorer at +130. To get even more cash on two things that I think are locks, take Collins to score, along with a Seahawks win for +300.

Terry has been scary in his second season in the league and his talent is undeniable. The real issue has been the QB play in Washington this season. However, chemistry has been building with the young QB/WR duo. More targets, and importantly, receptions have been coming his way as of late. In their last two games McLaurin received eight and seven targets for six and five touchdowns. The Seahawks pass defense isn’t great and I see the young WR ending this one with over six catches.

Take your game to the next level with the best promotions and deals from our Betting Offers Page. Here’s just a little preview of what you can find there:

Week 4 of the NFL season kicks off Thursday night with the ...