We are closing in on the final two Monday Night Football games of the year and this week we have one of the oldest rivalries between two teams that are fighting for their playoff lives in the Steelers and Browns.

This will likely be Ben Roethlisberger’s final home game in front of the Steeler fans so the home crowd will likely be out in full force to show their appreciation for one of the all-time Steeler great. The Browns have been in a nosedive over the last few weeks as it looks like the Browns and QB Baker Mayfield may be headed for a divorce.  The Browns have lost 3 of 5 and will need to win out and get plenty of help in order to make it into the playoffs. 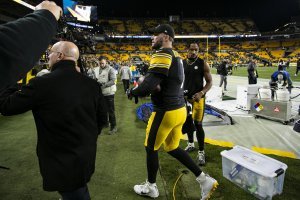 Big Ben will have one final start at home Monday Night

Despite the noise surrounding the Browns, they head into this matchup as the road favorites. The Steelers have lost four of six and have struggled on offense all season as Big Ben has struggled to have time to throw behind one of the worst offensive lines in football. Like the Browns, the Steelers have a small opportunity to make the playoffs if they win out so this game should be fairly competitive between two desperate teams.

Najee Harris has had a solid year with 984 rushing yards and six TD’s and I think he has a great chance to find his way in the endzone Monday night. It will be a cold night in the upper 20s in Pittsburgh which should make it difficult for both teams to throw the ball. Nick Chubb and Najee Harris have similar rushing styles and both should have big nights on Monday Night and I think both will find their way in the end zone.

Check out BetMGM or Unibet for the latest odds on the Steelers vs. Browns

The Browns are in the top 10 in total team defense and the Steelers have struggled with inconsistency on the defensive end but both should play well in this weather environment and I don’t think either QB will have a great night throwing the ball. I think both players will be under their total yard targets in what should a be a run-heavy night for both teams.

I like Harris’ chances to get over 70 yards in this one as the Steelers have struggled to throw the ball all year as Big Ben’s arm is showing a noticeable decline and Harris has been the only weapon the Steelers can consistently rely on from week to week.

If the Bengals lose the rest of the games and the Steelers win out, the Steelers would win the division with a 9-7-1 record. The Bengals face the Chefs today at home and then head on the road next week to Cleveland so having them drop their final two games is a possibility. The Steelers will visit the Ravens next week on the road in another big AFC North matchup. Even if the Bengals don’t lose out if the Steelers can finish up at 9-7-1 they should be able to get into the playoffs as the 7 seed in a crowded AFC where the tie will likely give them a half-game advantage over what looks like will be a big group of 9-8 teams. 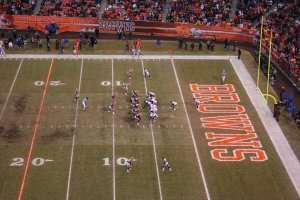 The Browns need to win out and get some help

The Browns must win out and have some help from other teams to have a shot to make it to the playoffs with a 9-8 finish. Both teams have the ability to make a playoff run but have been inconsistent throughout the year. Being that this may be Ben Roethlisberger’s last game I think the Steelers have the best shot to put together two wins and head to the playoffs one last time with Big Ben behind center.

Quarterback Baker Mayfield was traded out of the Cleveland Brown for the ...

This Monday Night we have the rare opportunity to watch two games ...