Michigan has had a stellar month in terms of the gambling revenue that it has pulled in October. However, there is a strong chance that Michigan will be able to ramp these figures up even more if the historical horse racing bill is passed. 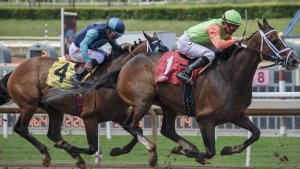 There has been some opposition to this idea in the past but the numbers don’t lie which has brought those in opposition to a different viewpoint. It is believed that the bull will allow odl race tracks to revive and for historical horse racing to be brought to the existing race track in Michigan as well. There are still plenty of T’s to be crossed and I’s to be dotted but it would appear that historical horse racing may become a reality in the Great Salt Lake within the near future.

Looking for the best horse racing operators in your area?

Historical horse racing may not be that common to most online sports bettors but it is an avenue that can potentially generate a significant amount of revenue for the gambling state of Michigan. The premise of HHR machines is that they resemble slot machines to a certain extent. The common characteristic is that both require players to insert a wager and then start the game to see what the result will be.

The major difference between the 2 is that your average slot machine is based on RNG (random number generators) which randomly generate numbers that will either correspond to nothing or give you the winning combo of numbers/symbols. An HHR machine is based on actual horse racing events that have taken place in the past. You would think that you could cheat this by looking at historical results. However, the machine assigns you a horse from the race so you don’t actually have any control over your picks. As such, no cheating can take place, it is random, just like slot machines.

The revenue of these machines in Kentucky alone is enough reason for Michigan to want to deploy them on current and old racer tracks in the state. The revenue these machines have generated elsewhere in the US is staggering and will no doubt give the already blossoming gambling industry in Michigan a big boost.

While Senator Dan Lauwers is very keen on introducing these HHR machines into the gambling scene of Michigan, he does have a few hoops to jump through and a few groups to appease first. This is the third year in a row that horse racing interests have tried to get this HHR bill over the line. In the previous 2 years, the major opposition has naturally come from other gambling operators who fear that their industries may lose significant revenue.

This remains the case for the third attempt to pass this bill but there are at the very least more progressive talks taking place to allow it to pass into law. However, this is only because there have been amendments made to the bill that include positive changes for the other gambling entities. Things like “limiting the state tracks to only 3 and the number of HHR machines toa total of 1,500”. Furthermore, tracks will need to be 40 miles or more outside of  tribal casino zones. Increasing the tax rate to the same 19% that casinos pay and lastly, offering casinos the chance to apply for simulcast licenses.

Overall, it is still unclear whether or not the bill for HHR machines will pass. The numbers and stats are there but the other gambling entities in the state are naturally concerned about what it might do to their own burgeoning markets.