It’s finally here! We have made it to peak Summer and you know what that means. Everyone is taking vacations or heading to the beach, Joey Chestnut is inhaling ridiculous amounts of hotdogs, and 8 modern day Paul Bunyan’s are looking to lumberJACK as many unlucky baseballs as possible through the thin Denver air in hopes of winning the 2021 Home Run Derby.

Major League Baseball’s most fun packed event is back after a year off in 2020, and with any luck, it will be just as competitive and entertaining as the demolition derby of dingers we saw in 2019! Let’s take a look at this year’s contestants ahead of the monster mash that’s going down Monday July 12th at the Colorado Rockies Coors Field.

Soto has had a bit of a down season with the long ball, but any fan of the game knows that this man has power. Let’s face it, in the Derby it doesn’t matter what you’ve done in the first half of the season, all that matters is that you consistently make solid contact and are able to drive the ball when your time comes. At 22, Soto is the youngest player in the Derby this year, so it’s possible that this may be the first of many appearances for the Nats Left Fielder. 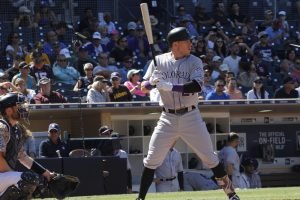 Representing the hometown team, Trevor Story should be comfortable at the plate in the Mile High City. Story’s been on and off the field with injuries this season, but his play has picked up as of late, and he’s finally hitting his stride after a slow start to the season. Look for him to entertain the crowd and try to be the fourth player to win the Derby in his home ballpark.

Even if he doesn’t win the Home Run Derby, Trey Mancini is a shoo-in to win comeback player of the year. The Orioles First Baseman missed last season due to Stage 3 colon Cancer, but is back, healthy, and maybe the most inspirational player in the league. No matter who you want to win this event, no one should be upset if Mancini’s able to take the title.

Mets first baseman Pete Alonso was forced to take a year off from defending his crown due to the event being canceled in 2020 thanks COVID. He’ll be back Monday night and attempt to be the first batter to go back-to-back in the event since Yoenis Cespedes in 2013 and 2014. Alonso smothered 57 total long balls on his way to the trophy in 2019 and he will need another such effort if he hopes to repeat.

Prior to this season, Salvador Perez was a solid Home Run hitter, but this year he’s been absolutely teeing off. Only seven homers short of his career record already, this year’s oldest participant (31) is looking to make history as the first catcher to win the event. 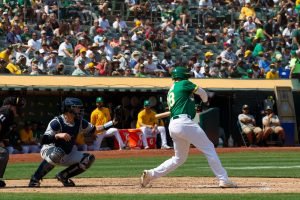 This might be the least familiar name to some on this list, but trust me Olson can rake. Even in the cavernous Coliseum that Athletics call home he’s been able to hit 59 home runs since making his debut in 2017. Unsurprisingly he’s hit even more on the road with 65. If there’s one player on this list who could turn heads hitting balls in the Mile High air, it’s Matt Olson.

Joey Gallo entered the League in 2015 and has been smacking homers ever since. However, this will only be his first entry into the Home Run Derby. He started this year at a pretty slow pace, then absolutely exploded onto the scene in late June. When the dust settled Gallo had homered in five straight games. This man is red hot, and looks to take that heat with him straight into Monday night.

Los Angeles Angels
2021 HR Total: 32
Longest HR 2021: 470 feet
Last but certainly not least, we have the man, the myth, the living legend, Shohei Ohtani. He’s done something most people didn’t think was possible for decades. Make the Angels watchable. He leads the MLB in Home Runs up to this point, and will likely hit one or two more by the time the Derby even starts. He won this event in his home country of Japan, so the pitcher/slugger knows how to perform in these events. He’s an easy favorite to win the whole thing, but every other competitor will bring their A-Game in hopes of knocking him out.

Find the best sports betting sites to bet the derby, and every other MLB event with our sportsbook comparison tools.

Preview of Paul/Silva Anderson Silva and Jake Paul will go to war ...