The NFC East was a dumpster fire of a division last year. The Washington Football Team came out on top with only a 7-9 record and the Giants were a game away when they finished 6-10. Both teams are hoping this year will be different.

See below which team we have picked to finish last in the division and which one we think is a sleeper who’s likely to make a deep playoff push. 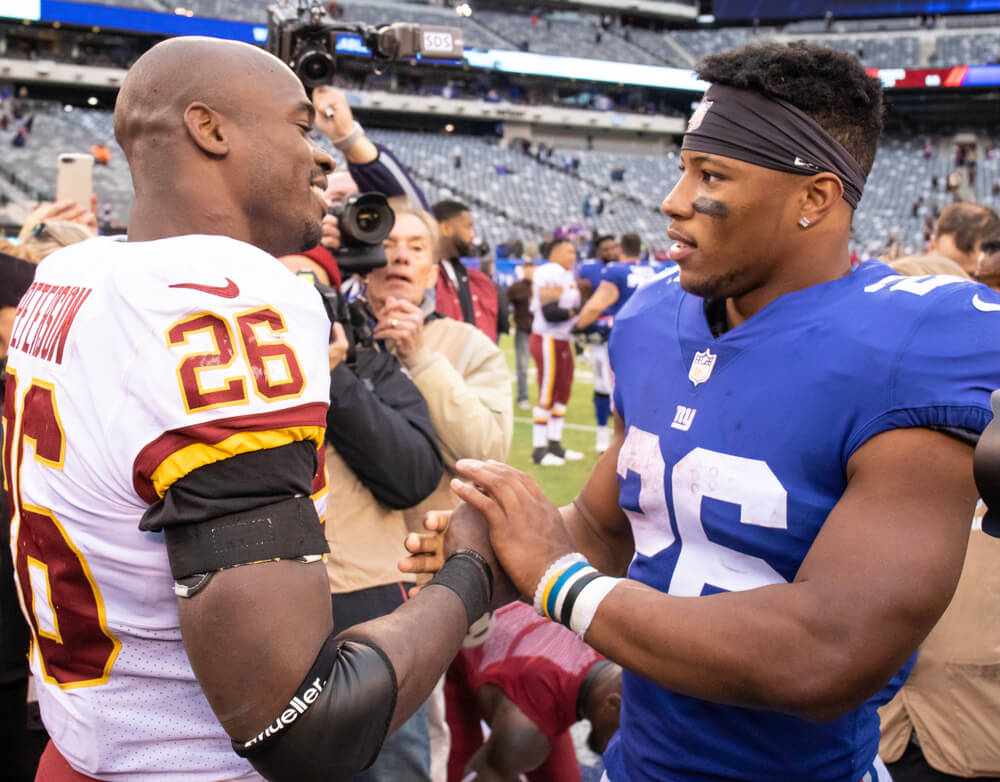 The Giants started the 2020 campaign 0-5 before a key win over the Football Team in week 6. From there, the team, and especially the defense only got better. In week 13 they not only defeated the Seahawks, but held them to 12 points.

Still, with key injuries to running back Saquon Barkley and Daniel Jones, Big Blue would only win six games, falling just one short of winning the division. In their stead Wayne Gallman and Colt McCoy did their best. Even Evan Engram reemerged as a Pro Bowl TE after staying relatively healthy.

It was obvious at the end of the season that Joe Judge has his squad going in the right direction. D-Coordinator Patrick Graham has orchestrated an elite defense that finished the year with 40 sacks without a true standout pass rusher. That defense was ninth in points allowed and 12th in yards allowed even without an offense chewing up much clock.

High expectations are set for year two of the Joe Judge era. Daniel Jones showed last year that he can play in the NFL. The Giants are still waiting to see if he can take over games and will the team to necessary wins. Jones will need to improve, especially in the turnover department where he’s fumbled 29 times in 27 games.

A healthy Saquon Barkley will help take pressure off of Jones as teams will have to respect the New York run game. However, the front office didn’t help Barkley or Jones much by leaving last year’s O-Line mostly intact. According to Pro Football Focus, the line was 31st in the league in pass-blocking efficiency and gave up the fourth most pressures in the league.

The front office did their job and went out and acquired needed talent. WR Kenny Golladay was added in free agency along with TE Kyle Rudolph. Combined with existing pass catchers Sterling Shepard and Darius Slayton, the G-Men and Jones are no longer missing weapons on offense.

This will likely end up as another middling season for New York. I think it will become apparent by the end of the season that Jones is not the long term franchise QB. After finishing fourth in the division with a 6-11 record the Giants will start looking for a new QB in the draft. Ryan Fitzpatrick moves from Miami to his 9th NFL team in D.C.

Although a 7-9 season isn’t great, it was good enough for a division title in the weak NFC East and a wild card playoff spot for the Washington Football Team. Let’s not forget that this team was 3-13 the year before and did the rare worst to first leap in only one season.

In his first year with the team Head Coach Ron Rivera assembled a tough defense and cobbled together a consistent offense, even with inconsistent pieces. Second overall pick Chase Young lived up to the hype on the defensive line. Others like Montez Sweat and Daron Payne left their marks on opposing QBs.

The Football Team’s QB position was a constant revolving door. Dwayne Haskins won the job, then lost it so bad he was cut midseason. Kyle Allen did fine but couldn’t stay healthy. Alex Smith then made his miraculous return to the field, but would be replaced by Taylor Heinicke. Heinicke would breathe new life into the offense, and push Tom Brady and the Bucs to the brink during the Wild Card game.

Is prolific journeyman an oxymoron? Because that’s exactly what the Football Team acquired when they brought in Ryan Fitzpatrick to be their starting QB. Fitzmagic can be an electric presence both on the field and in the locker room, and no doubt will lead the WFT in the right direction.

Fitz may not be the team’s long term QB of the future, but for now, the veteran in his 17th season could be the piece that gets them deep into the playoffs. Antonio Gibson will look to build upon a breakout rookie campaign and become a dominant three down back. Curtis Samuel was added to the WR’s and is now paired with Terry McLaurin to form a scary WR duo.

The defensive line in Washington is the best in the NFL. Chase Young will likely be even better than he was last year. The attention he garners will free up other guys like Montez Sweat to hunt down opposing QBs.

It will all come down to the offense for the Football Team. The defense is going to show up and be top five in the NFL, but can the offense perform? I think they can, and will. The Washington Football Team wins the NFC East again but this time with a solid 11-6 record before going on a deep playoff run.