We have some big games in the SEC this week that could have a big impact on not only the SEC bowl picture but also the College Football Playoffs as well. College Gameday will be in Oxford for a big SEC West matchup between Ole Miss and Texas A&M, and top-ranked Georgia heads on the road to face a Tennessee team that has been impressive on offense over their last few games. If you aren’t familiar with College Football betting check out our Betting Strategies page to get a detailed breakdown. 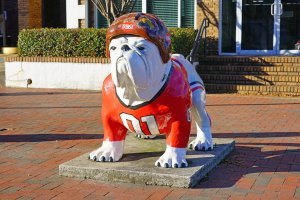 The Bulldogs are the favorites to take home the national title 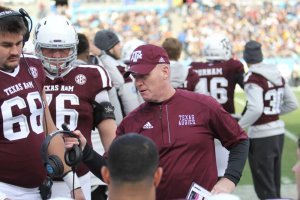 The SEC east is all but locked up by Georgia as they will likely head into the SEC title game against Alabama. In the West, Texas A&M has an outside shot to win the West if Alabama falls to Auburn in the Iron Bowl. One of the biggest games of the week is the Aggies heading to Oxford to take on an Ole Miss team that should make for an excellent game. The winner of this matchup has a slight chance to sneak into the College Football Playoffs if they can finish the season 10-2 and we have some upsets in the Big 10, Pac 12, or Big 12 which could definitely happen. Texas A&M is favored by -2.5 in this matchup and I like Ole Miss’s chances to put up points on the Aggies defense and pull away late with a close win.

Georgia heads to Knoxville as a 20 point favorite over the Vols but this could make for an interesting game based on what we have seen from the Tennessee offense recently. Josh Heupel has Tennessee running a spread offense that could take away Georgia’s side advantage and get the Vol’s skill players some opportunities to make plays. Georgia has not allowed an opponent to score more than 13 points in a game so far this season and I like the Vols’ chances to put up some points at home. I think this game stays relatively close but Georgia should be able to wear the Tennessee defense down in the second half.

The Battle for the Golden Boot-which references the shape of Louisiana and Arkansas stacked on top of each other typically is held Thanksgiving weekend but will be played this weekend in Baton Rouge. LSU shows flashes each week that they have the talent to keep up with anyone in the country as evidenced by last week’s game against Alabama. They have struggled with QB play and defensive backfield issues which have led to their disappointing 4-5 record. I think LSU winds away to win this game at home as they will be playing with nothing to lose in somewhat of a lost season.

Auburn suffered a tough loss to Texas A&M on the reload last week and will look to bounce back at home against Mississippi State this week. Auburn is favored by 5.5 and this should be a fun game to watch with both offenses putting up plenty of points with their pass-first offenses. Both teams have young rosters and are teams to keep an eye on for 2022 that could make some noise. Kentucky has changed its reputation from being a basketball-only school

The Wildcats have struggled down the stretch after a red hot first half of the season and will look to take out their frustrations on a Vanderbilt team that is 2-7. Kentucky can still finish up at 9-3 with winnable games against Vandy, New Mexico St., and Louisville, which should get them into a legit New Year’s Day bowl game.

Georgia is likely to get past Alabama in the SEC title and could head into a rematch of last year’s bowl matchup against a Cincy squad that kept the game close last year in a 24-21 loss.

If Alabama loses to Georgia in the SEC title game it will be tough for the Playoff Committee to allow Alabama into the Playoffs even if they are one of the best teams. In that scenario, Alabama will likely fall to the Sugar Bowl, which is the tie-in bowl for the top SEC team not in the CFP.