It’s hard to believe that we only have a few more weeks of the regular season in the NFL, but here we are close to heading into what looks to be one of the most unpredictable playoffs in recent memory. In the AFC the Chiefs have won 7 in a row after a slow start and are now the Super Bowl favorites once again. In the NFC, the Bucs and Cardinals were riding high as the top seeds but both suffered tough losses last week and now the top seed in the NFC is up for grabs. If you want to get in on this weekend’s matchups head over to our Offers Page where you can get a full list of sign-up bonuses and user promotions.

The Chiefs have the best odds to win the Super Bowl after a slow sport and the Packers and Bucs are right behind them in what looks to be a wide-open playoff this year. With the number of games missed by Covid, the Super Bowl teams may come down to which 2 teams are the healthiest and have a full roster ready to go come January.

Check out BetMGM or Unibet for the latest odds on the week 16 action: 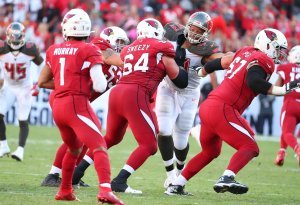 Kyler Murray will need to have a big day vs. Colts

The Colts and Cardinals are two teams heading in opposite directions heading into week 16. The Cardinals were thought to be the early Super Bowl favorite out of the NFC but Kyler Murray went down with an ankle injury and missed a few games and since his return, the Cardinals have not looked like the team that we saw earlier in the season. The Cardinals are tied at 10-4 with the Rams and are in must-win mode if they want to win the Division and host a home playoff game. The Colts are surging in the AFC and had a big win over the Patriots last week at home.

The Colts have won 5 of 6 but will be without 3 offensive line starters which should make it tough for star running back Jonathan Taylor. Taylor has caught fire over the back half of the season and may end up being the NFL’s rushing leader as he already has 1,500 yards.

The Bills and Patriots face off Foxboro in a key AFC East game that will have major playoff implications. The Patriots have a one-game lead over the Bills and can likely put the division out of reach if they win on Sunday. Mac Jones struggled last week against the Colts for the first time in weeks and I think the Patriots will bounce back and put up a solid performance at home. The Patriots will be without two of their top playmakers on offense due to being on the Covid list, so Jones will have to step up and lead the Patriots offensively. 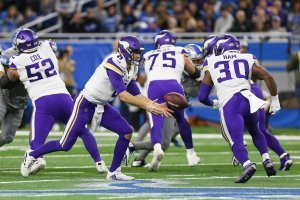 Kirk Cousins is having a career year for the Vikings.

The Rams seem to have hit their stride in the last three weeks after a mid-season lull and head into their big NFC matchup with the Vikings on a three-game win streak. The Vikings are currently 7th in the NFC and if the season ended today they would be in the playoffs. This will be a mini playoff game for the Vikings as they have several teams nipping on their heels trying to grab one of the 3 wild card spots. Cooper Cupp has over 1600 yards receiving as he and Matthew Stafford have clicked right away in year one.

The AFC North could come down to this game as this should be an epic battle of 8-6 teams that have shown flashes of dominance followed by disappointing losses this year. It looks like the Ravens will still be without Lamar Jackson at QB, which seems like it should tilt the most likely winner in this game to the Bengals, who will be at home and are currently the 4 point favorite.