Bet365 Review
Nothing Found
About betting.net
Betting.net / NFL Playoff Preview, Chiefs vs. Bills, Odds, What to Watch For

The Chiefs and Bills face off Sunday afternoon at Arrowhead Stadium in what should be a high-scoring and entertaining game for football fans. The Bills and Chiefs both struggled at points throughout the year but put together impressive second halves of the season. We could be looking at the top two teams in the AFC facing off a week early based on what the oddsmakers think.

As of now, the Packers are the favorites to win the Super Bowl at +380, and then the Chiefs +425 and the Bills +500 are right behind them with the next best odds. So with that being said, the winner of this matchup has a great chance to make a run to the Super Bowl and we should be in for an epic game on Sunday. Betting.net is your one-stop shop to get an edge for the NFL playoff action and if you want to get further tips head over to our football strategies page. Arrowhead stadium should be rocking on Sunday afternoon

The Chiefs are only 1.5 point favorites at home which speaks to how good the oddsmakers think the Bills are. I have a feeling the Chiefs would be at least a 7 point favorite against any other team in the league at home, so that goes to show how good the Bills are. The Bills beat the Chiefs 38-20 earlier this year in Kansas City which should give the Bills plenty of confidence going back to Arrowhead Stadium this weekend. At the time the Chiefs were struggling for an identity on offense and I don’t think anyone expects the Bills to hold the Chiefs to 20 points or less again this time around. 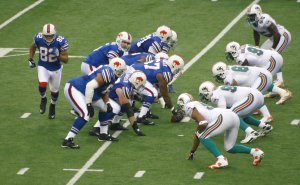 Despite how athletic Patrick Mahomes is he doesn’t run the ball a ton compared to Josh Allen. Allen rushed for 763 yards this season and ran for 8 TDs in addition to his 36 passing touchdowns. How well the Chiefs can contain Allen on the ground should have a big impact on this game as they gave up nearly 400 total yards to Allen in their matchup earlier this season. If the Cheifs can contain Allen from getting outside of the pocket they have a great shot of winning this game and advancing to the AFC Title.

The Bills lost 38-24 in last year’s AFC title game and typically in payback situations like this the team that lost the matchup the prior year ends up coming out on top. As much credit as the Chiefs got for finishing the year well they still have struggled at points with offensive line production and on the defensive side of the ball. The Chiefs defense showed some holes in a Week 17 loss to the Bengals on the road and it will be interesting to see what type of defense shows up on Sunday.

I have a feeling we could see one of the highest-scoring games in playoff history Sunday between these two teams. The Chiefs likely realize with their defense that they will need to outscore the Bills to have a shot to win, and I think Mahomes will come out the gates throwing downfield. The Bills put up 38 in the first matchup against the Chiefs on the road and I think the Chiefs are going to put up a great offensive performance on Sunday and we could see something like a 45-38 final score when all is said and done.

Take your pick amongst any of the big playmakers for either the Bills or Chiefs and the odds are that most of their big playmakers will find their way into the endzone on Sunday. I particularly like the odds Kelce finds his way into the endzone as he seems to have the highest probability to get targeted by Mahomes once the Cheifs get in the Red Zone.