This week wraps up the final week of the college football season as we have several big rivalry games that will have major impacts on the conference championship picture as well as the playoffs.

Michigan and Ohio State play in what will be a mini playoff game with the winner advancing to the Big 10 title where they will likely face off against Wisconsin. In the SEC Auburn and Alabama square off in the Iron Bowl where Alabama is a 19 point favorite. Check out our offers page to get a list of sign-up bonuses and promotions if you want to place some wagers on the final week of College Football action. 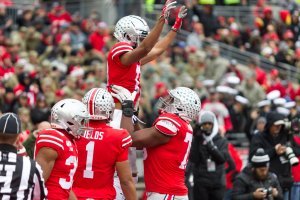 Georgia and Ohio State look like locks to make the College Football playoffs while the final two spots are still up for grabs depending on how things go this weekend and in the conference championship games next week. Cincinnati will face top 25 Houston in the American Conference Championship game for their final test. If Michigan gets by Ohio State this weekend we would have a situation where Michigan, Ohio State, Alabama, and Georgia get into the playoffs setting up an SEC vs. Big 10 showdown for the nation’s top team.

Michigan will look to break Ohio State’s 8 game winning streak against the Wolverines in Ann Arbor and finally get Jim Harbaugh’s signature win. The Buckeyes have been on a roll since their early season loss to Oregon and are favored by 7.5 on the road. Michigan’s one loss on the season was a gut-wrenching loss to rival Michigan State on the road and the Big House in Ann Arbor will be rocking as the Wolverines look to break through and reach college football’s elite. I think Michigan will try and run the ball and keep the ball away from Ohio State’s explosive offense, but ultimately Ohio State will pull away late in the game and secure their spot in another Big10 title game. 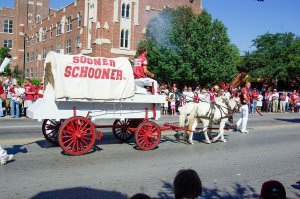 Oklahoma needs to finish strong to get the playoff committees attention

The Bedlam rivalry will take place in Stillwater as the Cowboys look to break through and secure their spot in the Big 12 title game. The winner of this game still has a shot to sneak into the College Football Playoffs if they can go on to win the Big 12 title game as well next week. Oklahoma has won six in a row and this seems like the year Oklahoma State will get back in the winning column in one of the most heated rivalries in college sports.

Michigan State is still in the hunt for a New Years 6 bowl and has a shot to make the Rose Bowl if they can beat Penn State and Michigan upsets Ohio State. Mel Tucker just signed a 9 year 90 Million dollar deal so the Spartans look like they will be players for years to come.

The Heisman race looks like it will come down to CJ Stroud or Bryce Young with both players likely having 2 more chances on the national stage to showcase their skills for voters. Bryce Young will face a Georgia defense that is one of the best defenses in history and if Young can lead Alabama to the upset he has a great chance to bring home the Heisman to Tuscaloosa. If Alabama loses to Georgia and Ohio State wins out it looks like it will be Stroud who brings another Heisman to Columbus.

The 2022 CFB recruiting rankings look very similar to the top 10 standings and taking a look at the 2022 class can provide a good indication of what teams we should be on the lookout for in 2022. Texas A&M has been stacking top 10 classes for a few years now and they look like the next team that could break through and evolve into a top 5 program annually.