Unibet Review
Nothing Found
About betting.net
Betting.net / NCAA News / College Football Preview, What to Watch For, Bets to Consider

College Football Preview, What to Watch For, Bets to Consider

The College Football kicks off on Friday and most college football fans throughout the country are crossing their fingers that neither of them gets canceled at this point. 5 Bowl games have been canceled so far due to covid outbreaks, and it appears that the 4 teams in the CFP are doing all they can to avoid any sort of outside interaction outside of their respective teams. Alabama takes on Cincinatti in the early game, while Georgia takes on Michigan in the nightcap.

The SEC schools are big favorites heading into the big matchups Friday and we would be headed for another all-SEC National Championship game like we last had in 2018 when Alabama beat Georgia 26-23. I think we will see an upset in one of these games which should give the National Championship a little more intrigue as most of the country would rather see a new champion crowned this season. 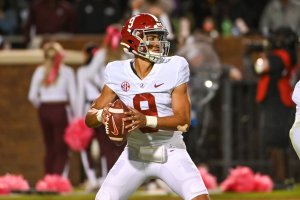 Georgia vs. Michigan Bets to Consider

Georgia entered the SEC championship game on a defensive roll and hadn’t allowed more than 17 points all season but gave up 41 points in the SEC title game to Alabama. Michigan has been impressive on defense as well and has one of the best rushing attacks in college football that put up a combined 2,910 yards led by Hassan Haskins who rushed for 1,288 yards and 20 TDs. I think this game will be relatively low-scoring and the Under is a good play as both QBs are underwhelming and both teams play a similar style of smash-mouth football and have big bodies on both the offensive and defensive line.

I wouldn’t be surprised to see Michigan come out of the gates swinging with some trickery in the first half to try and get the Georgia offense playing from behind. Michigan hasn’t been in a big game since the late 1990s and Jim Harbaugh will likely want to lay everything on the line to try and pull off the upset. Alabama came out aggressive in the SEC title game and as a result, the Bulldogs struggled offensively being in an unfamiliar position of having to throw the ball downfield. I think Michigan strikes first and we head into halftime with the Wolverines having a small lead with something like 10-7.

Cincinatti has one of the best quarterbacks in College Football that no one has heard of in Desmond Ridder who will likely be a top 10 draft pick this spring. Alabama has shown some holes on the defensive end this year and I wouldn’t be surprised to see Ridder have a big day against a young Alabama defense. Like Michigan, Cincinatti likely realized that they will need to steal a possession or two in this game to have a shot at winning as this game presents the biggest opportunity in school history to make their mark as an elite football school. I like both teams to get near 30 points and I think Alabama will ultimately pull away late in the second half as they use their depth to wear down the Bearcats. 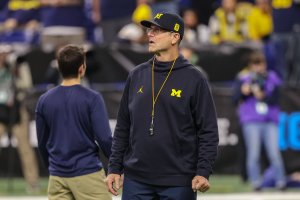 Harbaugh has quieted the doubters with a remarkable season this year

Harbaugh was under massive pressure heading into the 2021 season and even took a pay cut to keep his job in Ann Arbor. Harbaugh has won everywhere he has been and he finally has the Wolverines clicking on all cylinders. Harbaugh has coached in big games like the Super Bowl with the 49ers and I think his experience will be a factor in having his team fired up to play against a Georgia team that is probably questioning themselves after getting blown out by Alabama. I like Michigan to get past Georgia and have a great shot to win it all the next week against Alabama.