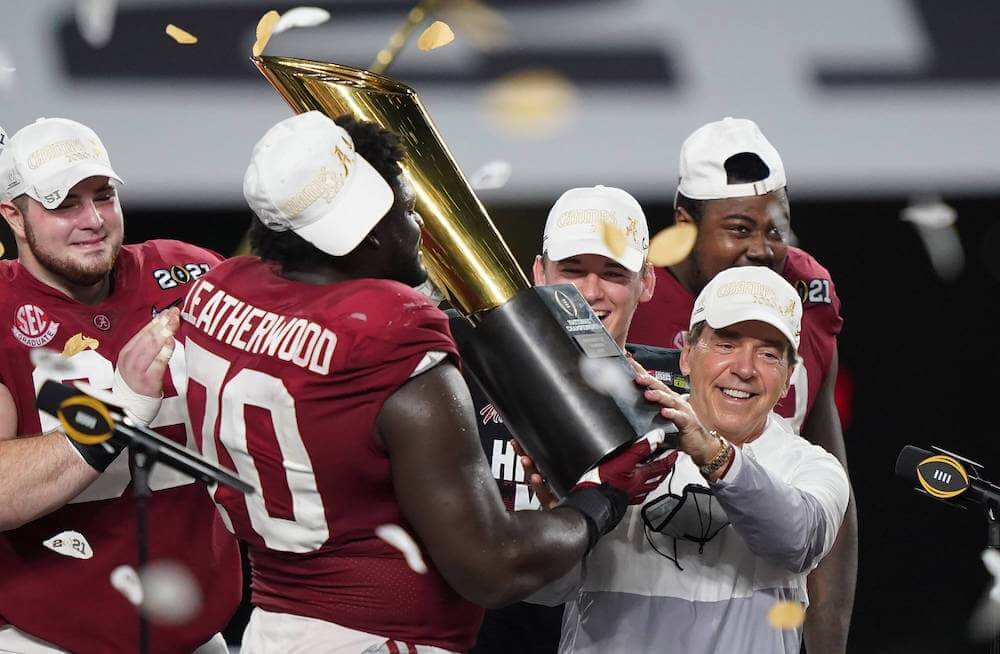 Nick Saban and Alabama won it all last year. Do they have the talent to get past Cincinnati and make it back to the National Championship?

Santa may be long gone, but College Bowl season is here to keep on giving. Every day we get great bowl games, and they only get better as we get closer to 2022. The stakes couldn’t be higher for this year College Football Playoffs, and some of the biggest online sportsbooks are offering deals to capitalize on all of the excitement. Let’s tale a quick look at the playoff matchups and give you our favorite promotions that will help you win even more money if you plan on betting the games.

Alabama comes into the Cotton Bowl as 13.5 point favorites. If you’re worried about them covering, know that history is actually on their side. Since a four team playoff has started, there have been six occasions where teams were favored by double digits. In only two of those games did the underdog end up covering. The first was the 2018 matchup where Alabama was favored by 15 points over Oklahoma, but only won 35-34. The second was a last second cover in 2020 when Notre Dame scored with last then a minute left to cover the crazy 19.5 point spread vs. Alabama in a 45-35 finish.

When it comes to this large spread though, I actually would take the Bearcats to cover. They’ve got a monstrous D-line that can stack up against an SEC front, and a pair of corners who might be the most athletic in the country. Alabama will also be without their best receiver John Metchie who suffered an injury in the SEC Championship vs. Georgia.

If you plan on betting Alabama, especially as a moneyline, you’re only getting -590 odds. This means you’d have to bet $59 just to get $10. FanDuel has a limited time odds boost that can make this bet very interesting though. They are currently running a promotion for new customers that allows them to put in any $5 bet on the college football playoffs and get 30-1 odds. If you like Alabama to win, you’d be crazy not to take this deal because you won’t find better odds anywhere else.

The Georgia Bulldogs went through the regular season undefeated only to be shocked by Alabama in the SEC Championship Game 41-24. The loss dropped them from the #1 spot in the nation down to #3. The odds makers don’t seem to like that ranking as they still have the Bulldogs as 7.5 point favorites over the #2 Michigan Wolverines. Most college football fans know all about the Bulldog’s defense, but the offense of the Wolverines might be potent enough to give it issues. Michigan has scored 143 points in their last three games alone and scored 42 points in their Big Ten Championship win vs. Iowa.

Don’t let Georgia’s defense distract you from their offense which has scored 30 points or more in their last 11 straight games before the loss to ‘Bama. Seven of those games saw the Bulldogs pile up more than 40 points as well. Take Georgia to both win and cover a game that won’t be close by the end of it.

Best Deal for Betting Both Games

Are you planning on betting both games? If so check out out BetMGM’s promotion before you do! They’ll give you a free $25 bet to use in the future if you wager $50 or more on each playoff game. The best part is that this offer is good for all BetMGM users, not just new ones. We know you’re going to bet on both games, why not get paid $25 to do it?