The other day we previewed the Saints and Panthers, and today we will break down the Buccaneers and the Falcons.

The Bucs are on top of the world after winning the Super Bowl last season, while the Falcons have a new head coach and hope to get back into contention after struggling the last few seasons. Dan Quinn entered 2020 on the hot seat after finishing the 2019 season 7-9 with the stench of the Super Bowl collapse in 2017 still lingering amongst Atlanta fans.

The 2020 season got off to a rough 0-5 start after blowing some early leads which led to the Falcons ownership to plan for the future. Dan Quinn was fired after week 5 and Raheem Morris took over and did a serviceable job as the Falcons finished up the season 4-12.

The Falcons hired Titans Offensive Coordinator Arthur Smith as head coach with hopes of putting up more points in the high scoring NFC South. Julio Jones forced his way out of Atlanta in the offseason and was traded to the Titans. One bright spot for the Falcons was the play from Calvin Ridley, who put up 1374 yards and 9 TDs.

Arthur Smith did an excellent job with Ryan Tannehill and Derrick Henry in Tennessee and should make an immediate impact with the Falcons playmakers. Despite having little Offensive Line help in 2020 Matt Ryan still put up 4,500 yards and 26 TDs.

With Drew Brees leaving the Saints the NFC South will be a little less competitive and the Falcons should have overall better luck than they had in 2020.  The Falcons have the third easiest schedule in football and could be one of the surprise teams in the league if things break their way.

While the Falcons will be fun to watch, the NFC is still too loaded for the Falcons to make the playoffs this year. 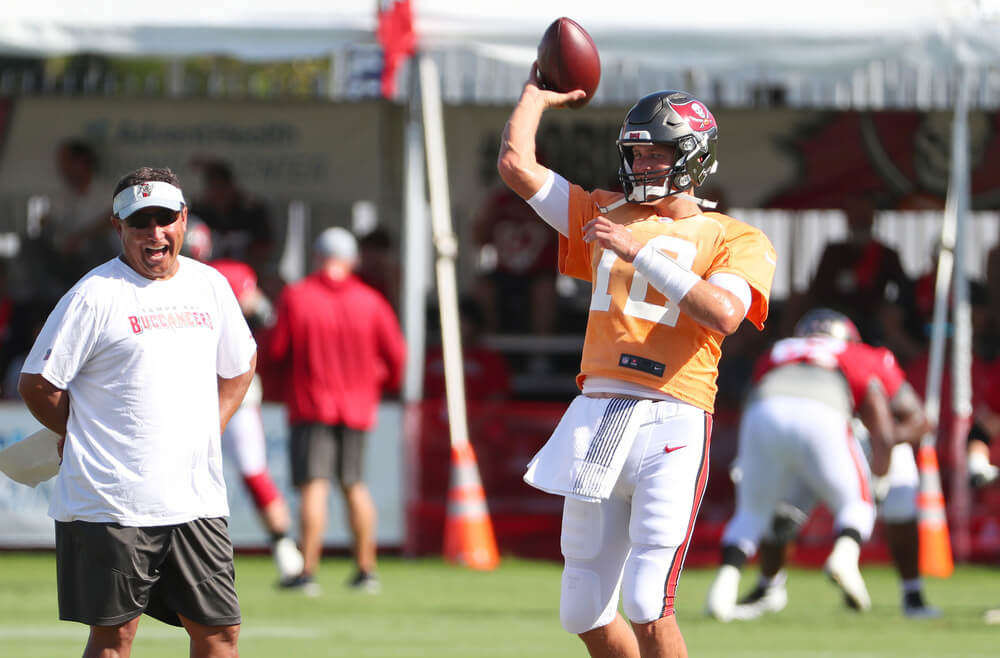 The Bucs had a magical year in 2020 as they won their 2nd Super Bowl title after defeating the Chiefs 31-9 in Super Bowl LV.

While expectations were high when Tom Brady decided to join the Bucs in the offseason, there were still plenty of question marks on the rest of the Bucs roster and coaching staff.

The Bucs were 7-5 through their first 12 games and they weren’t being mentioned as a Super Bowl Contender at the time. After the bye in week 13, the Bucs looked like a different team as newly signed players started to gel and the offense started clicking.

The Bucs went on to win 8 straight games in impressive fashion with 3 straight road playoff wins before returning home to become the first team to win the Super Bowl at home in league history.

It’s hard to believe the Bucs have come so far in 2 seasons but it is hard to see anyone in the NFC overtaking them this year. The roster has the perfect blend of youth and experience on the offensive end, while the defense was playing as good as anyone in the last 8 games. When you add Tom Brady to a roster like this, you have to feel great about your chances each and every week.

The Bucs get out of the gates much faster than they did in 2020 and we expect them to wrap up the NFC South fairly early while the Saints, Panthers, and Falcons beat up on each other. It is extremely difficult to win back to back Super Bowls and the last team to do so was the Patriots with Brady behind center in 2004.