This week in the NBA features plenty of game action but most of the noise has centered on the trade deadline with some big moves made that will have a big impact on the second half of the season.

The biggest deal was one of the worst-kept secrets in the NBA with James Harden getting shipped to the Sixers for a trio of players. Harden will now form a 1-2 punch with Joel Embiid as the Sixers look to cash in all of their chips and try to win the title this year. The Nets get Ben Simmons, Seth Curry, Andre Drummond, and two first-round picks from the Sixers which will help out with their depth issues.

The other big trade involved Dallas moving Kristaps Porzingis to Washington for Spencer Dinwiddle and Davis Bertans. This move will allow the offense to flow through Luca Doncic even more and give the Mavericks some much-needed outside shooting. If you are just getting caught up on the NBA season be sure to head over to our basketball strategies page. 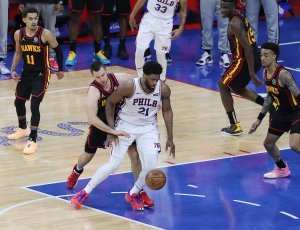 Embiid and Harden will make the Sixers tough to beat

The Sixers likely won’t have James Harden available for the Friday nights game but the Sixers will have some new faces in the starting lineup after losing Seth Curry and Andre Drummond. Drummond and Curry don’t get a ton of attention but they were critical parts of the Sixers roster. It will be interesting to see how Harden and Embiid play together as both players look to win their first NBA title. Embiid is one of the MVP favorites and will now have to share the ball with the ball-centric James Harden.

Let’s take a look at the NBA titles after the big moves at the trade deadline:

The Nets are still the favorites to win the NBA title but other teams are starting to close the gap and it looks like the NBA champion will come from one of these 5 teams. The 76ers took a big jump today and now are +700 to win it all. The two most consistent teams have been the Suns and Bucks and we could be looking at a potential NBA finals rematch if they can stay healthy in the second half of the year. Lonzo and the Bulls are playing great basketball

The Bulls went 6-4 in their last 10 games and have fallen down the 3 spot in the East which goes to show how loaded the conference is this year. The Heat and Bucks are a half-game above the Bulls in the East and the 8th seeded Nets are 5.5 games back. The 8 seeded Nets are still the favorites to win the NBA title which is crazy to see this late in the season. The Bulls have been one of the most consistent teams all year and they will have a big opportunity to grab one of the top two seeds in the East.

The NBA All-Star game will take place on February 20th in Cleveland between Team Durant and Team Lebron and should be a very entertaining game. After the All-Star game teams typically step up the intensity and try to position themselves for the best possible playoff spots. Team Durant vs. Team Lebron should provide plenty of entertainment.

Team Lebron features Giannis, Steph Curry, Demar Derozan, Nikola Jokic, and Lebron to round out their starting five. Team Durant will have Kevin Durant, Joel Embid, Ja Morant, Jason Tatum, and Devin Booker likely as the starting five which should make for one of the best All-Star games in recent memory. The league has a nice balance of older players that are still playing at a high level like Lebron, Durant, and Chris Paul, combined with young players like Lonzo Ball, Zach Lavine, and Devin Booker.