DraftKings Review
Nothing Found
About betting.net
Betting.net / News / Bad Decisions Made By Referees Which Caused People to Lose Their Bet

We’ve all been there. It’s a pivotal moment in the big game. The moment the plane is about to land, you can see the runway. A referee makes a decision which changes the momentum of the match and leads to the downfall of your favourites. Tears are shed, local headlines rage at the incompetence of the referee. Social media collapses into a world of endless debate. 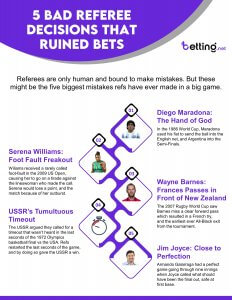 Usually, with any referee’s match making decision, there’s a discussion to be had over its validity. Other times though, it becomes pretty clear soon after – or even at that very moment – that the referee is in the wrong. That’s bad enough, now imagine you had money riding on that decision, and a wrong call had just caused you to lose a whole heap of cash.

There’s no doubt that’s happened to many as a result of many bad decisions, and here, we’re going to look at five of the most devastating examples. That way, even if there’s a spot of rain on your betting vacations, you’ll know you’re still enjoying more sunshine than some.

If you haven’t heard of this one, it’s likely you don’t have any English friends, as they’ve really not stopped talking about it since – or Argentinian friends, for that matter, as they love to brag about it. The Hand of God is the moment football genius Diego Maradona punched his way to the semi finals with a handball led goal which set Argentina up for a 2-1 victory.

It’s astounding to think that he got away with it. There’s no doubt it couldn’t be repeated with today’s technology. Back in the 1986 World Cup, however, the referee’s word was final, and thousands of betting tickets were torn up all around England and across the world.

We suppose – considering you never can tell how the change of such a big event can impact the rest of play – that Argentina could have gone on to win the game without it. But, with this one controversial decision, it seems as though the fate of England, and of many a bettings slips, were sealed.

Alright, we’ll admit this entry is a little bit different from the rest on this list. In every other example, the referee was probably wrong, either by simple reasoning, camera angle or for another reason. There’s really very little doubt, for instance, that Maradona should have at least received a yellow card and had the goal disallowed. This one, however, is one that people still passionately debate today. Whichever side of the fence you end up on, many people view the referee as wrong, and it will certainly have cost plenty of people their bets.

In a move that must have stung worse than an overnight delay, Williams received a foot fault: something very rarely given at such a pivotal point in the match. Serena Williams lost it at the judge, berating and swearing at her for the call. When her comments were related to the umpire, she was penalised a further point, costing her a spot in the 2009 US Open.

Surely as such a big favourite, many people had Serena on a losing bet that day. Williams remains unrepentant about the incident and many people have taken her side, claiming the call was unjustified. Some even suggested male athletes would not have been so harshly penalised. Wherever you stand on the issue, this one definitely made headlines around the world.

If you’re not familiar with international rugby, then allow us to take you on a luxury cruise through time and space, as we head to 2007 Wales for this clash between the dominant New Zealand and the ever vigilant France in the Rugby World Cup. The All Blacks (that’s New Zealand, in case you didn’t know) were the favourites and seemed to be dominating. However, it just was not showing on the scoreboard.

Worse still, referee Wayne Barnes missed a clear forward pass which allowed France to score an all important try and win the game. To give you an idea of how big an upset this was, and how shocked many bettors would have been, it was the earliest ever exit for New Zealand from the World Cup. 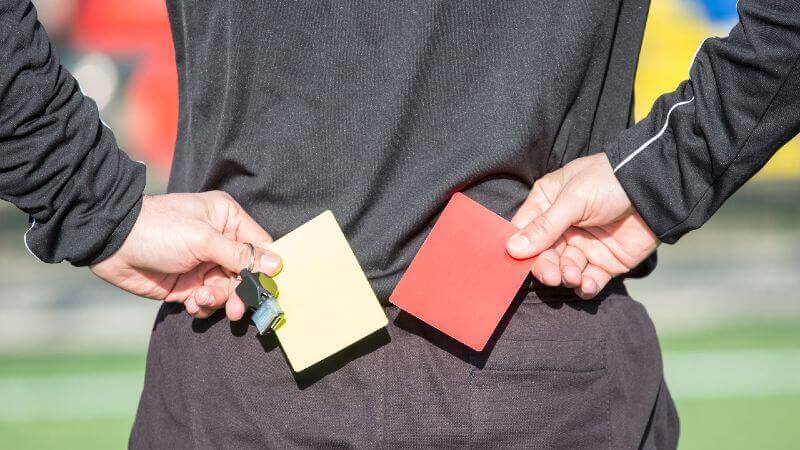 #4 – Even the Greatest Trips Must Come to an End: The US Olympic Basketball Streak

While we’re not sure that Olympic basketball was a massive sports betting market back in 1972, the way the Super Bowl is now has proven it has international interest, so we’re sure there must have been some bets flying around the runways.

That’s especially the case, considering that the US basketball team were undefeated favourites going up against superpower rival the USSR. However, things were not going to plan. America found themselves a point behind with seconds to go. Doug Collins seemed to come to the rescue, winning two free throws following a foul. So, where’s the controversy?

In a bizarre series of events, the USSR claimed they had called a timeout which wasn’t allowed. They continued to argue after the game and in a decision which will be forever debated, officials restarted the last few seconds of the match, leading to a USSR victory and the end of America’s winning streak. If it makes those who lost their bet feel any better, the referee himself later admitted he had no authority to restart the game.

#5 – Every Journey Has Some Bumps: A Perfect Game Denied

In baseball, there’s arguably no greater accomplishment, no more thrilling (or high odds) a prop bet than the possibility of a perfect game. Consider the devestration in 2010 then that Armando Galarraga must have felt when umpire Jim Joyce wrongly called the ball for the Cleveland Indians, even though cameras showed the ball very clearly out. Dreams crushed, betting tickets torn up. It must feel like having all your holidays cancelled at once.

It appears to have been an honest mistake by the umpire, who apologized for his mistake upon seeing the replay. You may think that would go down about as well as airplane food from decades past, but Galarraga was incredibly forgiving of Joyce, ironically telling him that “nobody’s perfect”. Maybe not, but Armando was close on this night.