Fancy getting £250 towards your next season ticket? Then check out the current competition at Betting.co.uk. All you have to do is enter via Gleam.io and you could start the next season of non league football with a bang!

So here’s how you can get this great offer: 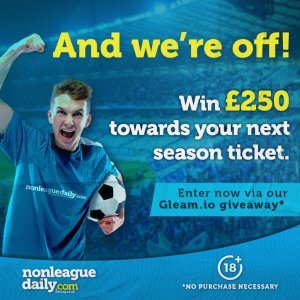 Simply enter the Non-League Daily £250 Season Ticket Giveaway over at Gleam.io. From here, you just have to complete some of the ‘tasks’ which will get you more entries and a bigger chance of getting that prize. You don’t even have to purchase anything to be in with a chance to win!

These tasks are all ridiculously easy. One just has you following @thebettingcouk on Twitter, another asks you to retweet @NonLeagueNews. Other challenges include things like watching Ginger Joe’s Horse Racing Tips Show on YouTube, or you could even just watch the Non League Daily show on YouTube. All of which won’t cost you a penny and could help you watch your favourite team floundering around in non-league football next season.

The great news is that the competition is already underway and it’ll go on until 27 June. From here, the winner will be announced on June 30, and if it’s you, you could then splash the cash on a season ticket for your favourite non-league footy team. If the season ticket costs less than £250, you can spend the remainder of the money on a charity of your choosing. Easy!

Now it’s just a matter of going over to Gleam.io, completing the tasks and then seeing if luck’s on your side. You could be seeing every game that newly promoted York City play in the National League, or even just see how Wrexham bottle their chances of playing in the EFL again. The choice is yours, so enter now and see if you get lucky!

Most of the sports bettors we know like to see their winnings ...

How to tax your sports betting winnings in New York 2022

Sports betting is now legal in New York, and that opens up ...