FanDuel Review
Nothing Found
About betting.net
Betting.net / MLB News / 2021 MLB All Star Game, Who to Watch, Our Choice for MVP 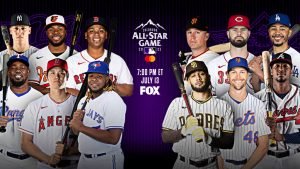 The brightest stars in baseball will shine this Tuesday, July 13th when they convene in Denver Colorado for the 91st addition of the Major League Baseball All-Star Game. The mid-summer classic is back after a year-long hiatus in 2020, and it seems with more excitement than ever. The starting rosters are set, but with so much talent in both dugouts it can be hard to know who to focus on. Below we’ve compiled some of our favorite stories from the first half of the 2021 MLB season, and will give you our pick for All-Star MVP.

While teammate Vladimir Guerrero Jr. is (rightly so) more well known, Teoscar Hernandez’s story is nothing short of amazing. In 2019, the Jays 26 year old outfielder was only hitting .189 before being moved back down to Triple-A. Flash forward a little over two years and Hernandez is hitting .297 with an OPS of .814, and starting in his first all star game appearance. A solid performance at the plate and in the field could bring even more recognition to the budding star.

The Rangers are in the midst of a rebuilding season with their eyes set on the future, not the present. With that being said, it’s easy to see why Kyle Gibson might not only be flying under some people’s radars, but maybe off of them altogether. But take a good look and you might just see an AL Cy Young award winner come from deep in the heart of Texas. Gibson’s having a career year at 33 years old with a 2.29 ERA halfway through the season after 17 starts. Trade talks have swirled, and Gibson’s last appearance in a Rangers jersey could come soon, but in the meantime keep your fingers crossed that your favorite player isn’t up to bat when Kyle Gibson is on the mound Tuesday night. 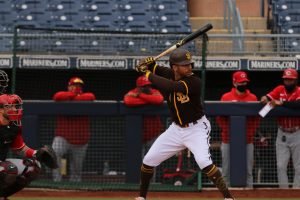 Love him or hate him, the Padres Shortstop has taken the baseball world by storm on the way to becoming the new face of the league. Can he be brash, obnoxious, and does he lead the league in errors? Sure. Is he also 22 years old, only in his third year in the league, and must watch TV with 28 home runs so far this season? You better believe it. El Nino is an enigma wrapped in a puzzle and you never know what you are going to get when he steps onto the diamond. Tuesday night’s all-star game appearances should be no different.

Our Prediction for 2021 All Star MVP?

Super hot take here right? There is a logic to this pick though besides the fact that Shotime is really really good at all things baseball. Most field players get one or two at bats to leave their mark at an All-Star Game. Most pitchers get one or two innings to do the same. The Angels two way star will be be doing both since he was selected to the AL Roster as a Designated Hitter, and again as a Pitcher. Ohtani will get twice the amount of facetime, and that alone will be hard for another player to beat, save a walk off home run or game saving play in the field.

Find the best sportsbook on the web to place your bets on the All-Star Game with our comparisons tools.

The biggest game of the year, Super Bowl LVI, goes down next ...