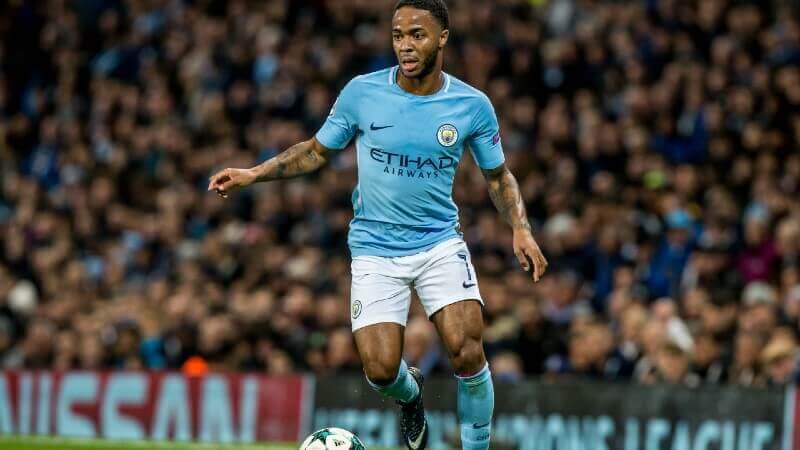 “I’m not here to be a number. I’m here to be one of the best, as simple as that. I just need to raise my game – I know exactly what I need to do to go where I want.”

Raheem Sterling was born on December 8th, 1994, in Kingston Jamaica but luckily for England and Manchester City fans, emigrated with his mother and settled in North London at the age of five.

Just four years later he was spotted by Queens Park Rangers. He became part of the Loftus Road youth set-up between 2003 and 2010 before Liverpool came calling.

The Merseysiders took him to Anfield and after a couple of years in the youth teams, he was fast-tracked into the senior side. From there, he became the third-youngest player to play for the club when making his debut in a Premier League match against Wigan in 2012.

The following season saw Sterling establish himself as a regular in the Reds’ first team and he went on to make 129 appearances in all competitions, scoring 23 goals in the process. International recognition came in 2012 when Roy Hodgson gave him his debut at the age of 17 in a friendly away to Sweden.

The 22-year-old has now earned 35 caps for the Three Lions, with a couple of goals to his name. Sterling also looks set to be a key part of Gareth Southgate’s side for the 2018 World Cup in Russia.

Eyebrows were raised when Manchester City paid close to £50m for Sterling in the summer of 2015 and he failed to live up to that price tag early in his Etihad career.

A lack of direction seemed to be holding the youngster back and a return of 13 Premier League goals from 64 outings across his first two seasons was arguably disappointing, while injury and a dip in form saw him lose his starting place.

The arrival of Pep Guardiola had a positive effect but despite making 33 top-flight appearances last term, he seemed to be on his way to Arsenal in a deal to bring Alexis Sanchez to City.

The summer switch failed to materialise and Sterling has since gone on to prove that Guardiola was wrong to even consider letting him go. Having switched to a more central position, he is scoring goals for fun this season with 10 from 15 appearances already and he appears full of confidence.

It remains to be seen whether England use him similarly and can utilize his obvious goalscoring potential, but his pace and skill will be an asset to the national team whatever role he is given.

His ratio of 54 club goals from 238 games is only going to improve as the talented forward is given more and more opportunities to show what he can do for both club and country.

Undoubtedly, the greatest moment of Liverpool’s recent history was the come-from-behind Champions ...